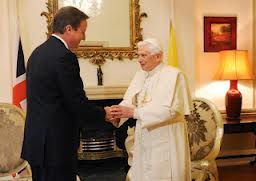 David Cameron and Pope Benedict XVI. Were they really friends?

The author of a new book, The Pope's Catholics, has found evidence that Pope Benedict XVI, long vilified as "Cameron's Pope," was in fact a good friend of those who were persecuted by the evil dictator during his rule between 2010 and 2015.

In his new book, Gordon Thomas explains that during the persecution of the Catholic church in the early part of the 21st century, Benedict XVI did not stand idly by, but actually attempted to defend Catholic doctrine.

Many Christians, and Catholics in particular, were dismayed when in 2014 Cameron brought in an "Equal Marriage" law, reducing the age of consent to 6, and allowing marital unions to involve all organisms, regardless of sex and species, provided that at least one human was involved. Although he had earlier given an assurance that this was not his intention, "the world had moved on," and earlier promises were no longer valid.

A happy bride, "hoping to have kids."

For Anglicans and Catholics, Cameron had given an "octuple lock" guarantee that they would not be forced to conduct such wedding ceremonies in church. This of course meant that it very soon became obligatory. When the "Bigotry Act" of 2014 was introduced, many priests were forced to go into hiding.

Of course, some quasi-religious people were delighted: Giles Fraser, the journalist and part-time vicar, had said "I am prepared to be boiled in oil, and have my toenails pulled out, but it won't stop me marrying three men and an elephant, if I am asked to." 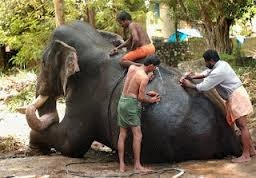 A wedding party, on its way to St Mary's, Newington.

But what was Pope Benedict XVI doing while all these changes were being made? Well, unlike some of his bishops and clergy, and totally unlike some nominally-Catholic MPs, he did in fact speak up in defence of traditional marriage; indeed, he provided shelter for many persecuted priests who rebelled against the new laws. In particular Benedict promoted to cardinal the man who later became his own successor on the throne of St Peter, preferring him to the obvious candidate ("Vin Rouge" or "Red Vin"), whose moral leadership he considered to be very weak. 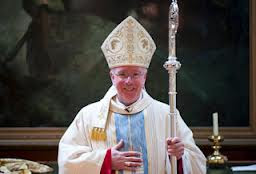