BBC presenter: After the sudden announcement of Pope Benedict XVI's resignation, we shall be talking to a balanced selection of people who have good reason to hate him. Let's start with you, Justin Welby. Your predecessor, Archbishop Cranmer, was martyred by the Catholics in 1556, so naturally you detest Pope Benedict. 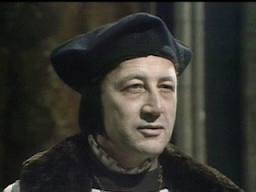 Thomas Cranmer - did Benedict XVI ever apologise for his death?

JW: Er, no, actually, I think Benedict has shown great dignity, insight, and courage. All in all, rather a good Pope, really. And I think it's an excellent thing when a major religious leader steps aside, in order to allow a younger man to take over.

BBC: Oh, you're no fun at all. Over to Richard Dawkins now, who can always be relied on to say something anti-Catholic.

RD: Sex. That's the main thing in life. And the Pope hasn't had any. What a waste. Look at me, I'm the man they call "Dr Sexy" in Oxford. Nearly 72 years old, and I'm still regarded as an Oxford Don Juan (geddit?)

BBC: Thank you, Professor Dawkins, for making that deep point of theology. Well, we at the BBC are nothing if not balanced in our coverage, so we also invited in a Catholic who hates the Pope. Catherine Pepinster is busy insulting the Pope on Channel 4, but instead we have managed to get hold of Lavinia Byrne, a former nun.

Panic-stricken nuns flee the bullying of the Catholic Church.

BBC: Thank you so much, Lavinia Byrne, for putting the Catholic point of view. We'll continue this debate on BBC Radio 5 Live, where Austen Ivereigh is being mauled by a specially-selected group of Leeds United supporters, but here is a final proof that God Himself (if he exists) hates the current set-up at the Vatican. 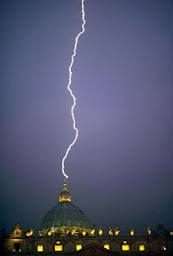