That lost episode of "Father Ted"

The scene: Craggy Island Presbytery. Fr Ted is sitting in a chair, reading a copy of Tina Beattie's God's Mother, Eve's Advocate, and sniggering at the dirty bits. Fr Jack is asleep in a chair.

The front door opens and Fr Dougal walks in. Ted hastily hides his copy of the Beattie book, and picks up a copy of the Vatican II Document 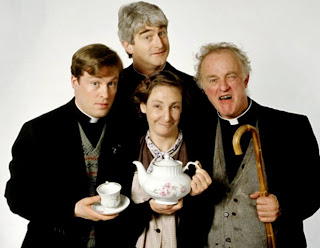 Nothing's wrong with the Catholic Church in Ireland!

Dougal: Hello, Ted. I've just run into one of those funny Redemptorist priests, and he told me to vote for "gay marriage", so I agreed. So tell me, Ted, what is "gay marriage"?

Ted: Now, Dougal, it's when two men or two women get married, rather than a man and a woman.

Ted (slowly): It's not supposed to be funny, Dougal. 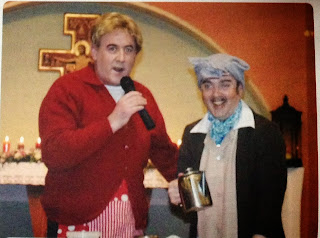 Ted: Now, Father Jack, that's not appropriate language these days! What did I tell you to say?

Ted: That's much better, Father. We don't want complaints about your being "exclusive". 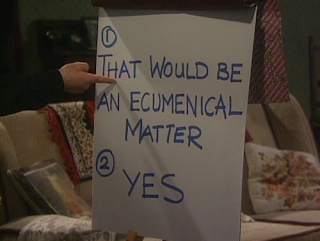 Fr Jack is given his voting instructions.

Mrs Doyle: It's Bishop Brennan, Father. I'll go and put the kettle on in case he wants some tea.

Fr Ted looks at her in puzzled way, but picks up the phone.

Ted: The money was just resting in my account, Bishop Brennan!

Brennan: Never mind that now, Crilly! How are you going to vote in this referendum?

Ted: Well, I thought, since Christ said marriage was between a man and a woman, I'd just vote No. But I'll pretend I voted Yes.

Brennan: Ted, you may vote according to your conscience, provided that you vote Yes. For if I catch you voting No, you'll end up in an even worse place than Craggy Island - I'll send you off to Ballydancer to work with Tony Flannery! The Church needs a Reality Check, Crilly!

The bishop slams down the receiver. 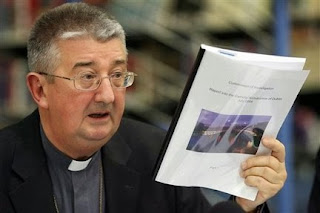 The Pope's report says we've failed our reality check, and we're not worth repairing.

Dougal: I heard all that, Ted. So, does that mean we're not going to be Catholics any more?