Vincent Nichols, Cardinal Archbishop of Westminster, the so-called "Pope's fruitcake", shocked the world today by celebrating a totally orthodox and traditional Mass. Said one eye-witness, "I came to Westminster Cathedral expecting to attend one of his famous 'gay' masses, but he used the traditional Latin liturgy, and even seemed to understand what most of it meant." 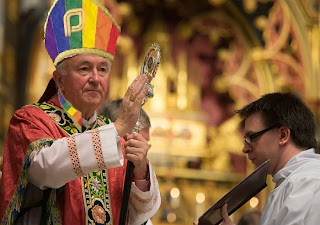 Apparently, as a concession to the cardinal's Liverpudlian roots, the communion anthem was Anfield's Numquam ambulabis solus*, but otherwise there were no innovations. Said our eye-witness "I was expecting to hear a reading from the epistle of Tina Beattie to the lost people of Roehampton, or perhaps Michael Coren's Catholics, dontchahatem? or even selections from the Timothy Radcliffe Bumper Book of Heresy, but in fact we had nothing but orthodox Catholic doctrine throughout."

*Use Google translate or ask Fr Hunwicke, if you don't understand this. 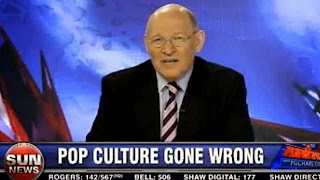 Things became even more shocking at the communion stage, when a homosexual couple was told that they could not take communion. "We had just said the bit about 'Domine, non sum dignus', when the cardinal interrupted with, 'That means you, buster. Clear off!'"

Vincent Nichols concluded the Mass by processing down the aisle to the bookstall, where there were huge piles of unsold copies of the Tablet. "By the powers granted to me as a Prince of the Church, I banish thee to the Pit from whence thou came!" he cried, and sure enough a mighty wind blew up and swept all the copies of the wretched publication back to the depths of Hammersmith. "Result!" shouted the Cardinal, this being the traditional way of concluding the Rite of Exorcism. 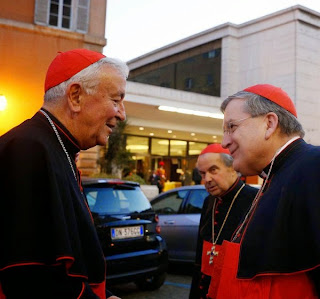 Said Deacon Nick Donnelly, a prominent retired blogger: "This is dynamite! Thank goodness that Bishop Arnold and Bishop Campbell caused my blog to be voluntarily shoved down my throat! I wouldn't have known what to say!"

Late news: Vincent Nichols is said to be feeling unwell.