The Pilgrim's Ogress 4 - the guilt of Titus' Grandma

After my stupid nephew escaped from the Tablet headquarters in Hammersmith, he wanted to go to Blogfen, a woeful traddy parish somewhere near Sidcup. Eccles had heard that there was a meeting there in honour of Titus' Grandma, to which Catholic bloggers were invited. My nephew somehow thought that he would be welcome. 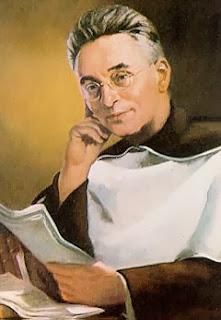 This is Titus, but we never met his Grandma.

It was quite difficult to get to Blogfen, because our donkey, Micky, carrying the emergency gin supplies, wasn't allowed on buses or trains. Also, Eccles wanted to go incognito, as he had heard that a lunatic from Croydon was out for his blood; so he dressed up as a clown and pretended to be his brother Bosco. We missed the religious events, but arrived in time for the party. 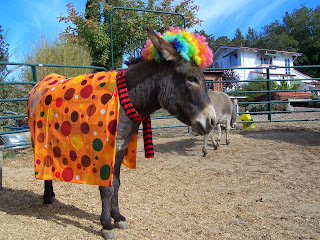 Our donkey, also in disguise.

The event was very strange. There was an old man called "Lofty" present, who said he had come along in order to shut down as many blogs as possible. He also had an interesting theory, based on turning over several pages of St Luke's Gospel at once, that Jesus was only on the Earth for one week - Born on a Monday, Baptised on Tuesday, Retreated on Wednesday, Did His ministry on Thursday, Crucified on Friday, Rose on Saturday, Ascended on Sunday. Lofty spent most of the party exchanging scowls with someone they called the "LMS Chairman", and in the end the two of them went outside for a punch-up and never came back. 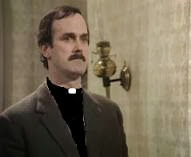 Eccles asked me to republish this photo of Basil Foltus as a young man.

Eccles says he will always look at Tina Beattie in a new light, as a result of the Blogfen party. As a leading Catholic thinker, she had come to the meeting, and Eccles, who is a little infatuated with her, asked her to dance. It was woeful seeing "luvvly Tina" and my idiot nephew Eccles tango-ing to a Gregorian chant, but this was supposed to be an occasion for getting to know new people.

Hans Küng was there too, and I thought he and I might dance, so I went up to him to ask. Silly me, it was his statue! Apparently Fr Finigan, the host of the party, had been given a copy of the original statue, and had not yet found a good home for it. Well, after a bottle or two of gin, it was an easy mistake for me to make.

Woeful - this man refused to dance with me.

Several more traddy bloggers were also present, many from the Brighton area. I remember talking to a man called Bones; he had come with his friend Blakey from Brighton, who kept saying "I 'ate you, Gardner", although we never discovered who this Gardner man was. 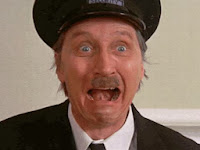 Bones (with an unusual cross) and Blakey.

But the person I remember best, because he talked for three hours without interruption, was someone they called "The Archbishop of Corby". I jotted down a few gems of his conversation, such as, "Make sure you understand the question you're asking, Ma'am, but it seems you prefer a black and white answer to a labyrinth of conditional logic gates you won't even acknowledge, as it's a question of objective disordering circumstances and Noachide/natural moral law, exposing your ignorance of intention/motive and circumstantial factors." This was in response to "Would you like another cup of tea, your Grace?" from a lady in a mantilla.

Sitting on the naughty chair.

Ah well, I slipped under the table shortly after that, and don't remember much more. Such is life, eh? What's more, they played Gregorian chant all afternoon, and not the music I wanted to dance to. Woeful.

This is the sort of music I prefer.