It's time to mock Charlie Hebdo

Although this blog is primarily for spiritual nourishment, we do occasionally tease the arrogant and powerful; likewise, we receive criticism in good humour.

For example, if Pope Francis insults my mother by calling her a self-absorbed promethean neopelagian, then I do not feel it necessary to punch him. In fact, since he was once employed as a nightclub bouncer, he probably packs quite a good punch himself. 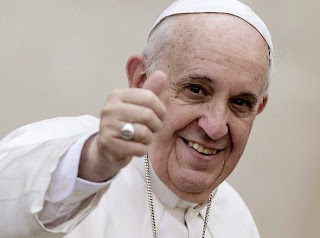 Likewise, if a deacon from Hell devotes a blog post to a character assassination of me, simply because I don't have a high opinion of Bernadette Farrell, then I take it in good humour, simply making a few cryptic references to idiots in garden sheds.

Now, how should we react if people insult Jesus, Mary, etc.? In Chesterton's The Ball and the Cross, there is the distinct suggestion that we should fight them:

The glass fell in ringing fragments on to the pavement, and Evan sprang over the barrier into the shop, brandishing his stick.
"What is this?" cried little Mr. Turnbull, starting up with hair aflame. "How dare you break my window?"
"Because it was the quickest cut to you," cried Evan, stamping. "Stand up and fight, you crapulous coward. You dirty lunatic, stand up, will you? Have you any weapons here?"
"Are you mad?" asked Turnbull, glaring.
"Are you?" cried Evan. "Can you be anything else when you plaster your own house with that God-defying filth? Stand up and fight, I say."
A great light like dawn came into Mr. Turnbull's face. Behind his red hair and beard he turned deadly pale with pleasure. Here, after twenty lone years of useless toil, he had his reward. Someone was angry with the paper. He bounded to his feet like a boy; he saw a new youth opening before him. Never mind this blog: here's something much better to read.

Obviously we do not approve of fanatics murdering cartoonists, even talentless prats who couldn't make a decent joke. Still, if Cardinal Vingt-Trois had horsewhipped the Charlie Hebdo editor on the steps of Notre Dame, many would have thought it no more than he deserved. Cartoons about the Virgin Mary giving birth, or Jesus being sodomized, deserve some response. Curiously, a lot of the Charlie Hebdo stuff is sexual: I suspect that its staff pinched most of their ideas from toilet walls.

So, Cardinal 23 definitely shouldn't have been ringing the bells of Notre Dame in memory of Stéphane "Charb" Charbonnier and his bunch of talentless freaks - a gesture mocked in the new issue of Charlie Hebdo:

No, it's a gesture they don't appreciate. What they appreciate is tasteless abuse. 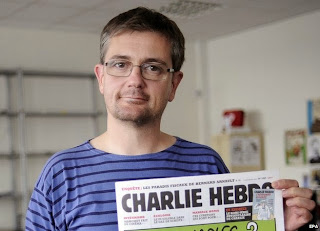 Charb has some awkward questions to answer at the Pearly Gates.

Got that? Je ne suis pas Charlie. Charlie Hebdo is a blasphemous Christ-hating pile of garbage, written by some very creepy people indeed. As you see from the picture above, Charb himself wore a shirt which his mother bought him when he was a teenager. Also, he couldn't even shave properly. A Peter Pan character stuck in the 1960s. A man whose hobbies included pulling the wings off butterflies and writing on toilet walls. His only friend was a pet rat called Eric, and even Eric decided he was too repulsive and ran away. 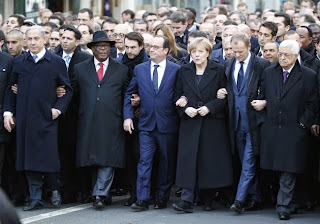 A bunch of fools sticking up for radical secularism. 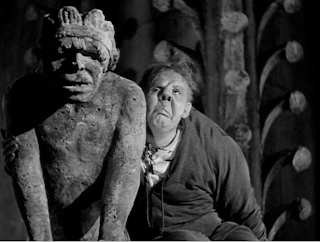 All right, rant over. Let Chesterton have the last word. Our duellists, Evan MacIan (Catholic) and James Turnbull (atheist) have reached France.

"Yes, France!" said Turnbull, and all the rhetorical part of him came to the top, his face growing as red as his hair. "France, that has always been in rebellion for liberty and reason. France, that has always assailed superstition with the club of Rabelais or the rapier of Voltaire. France, at whose first council table sits the sublime figure of Julian the Apostate. France, where a man said only the other day those splendid unanswerable words"—with a superb gesture—"'we have extinguished in heaven those lights that men shall never light again.'"
"No," said MacIan, in a voice that shook with a controlled passion. "But France, which was taught by St. Bernard and led to war by Joan of Arc. France that made the crusades. France that saved the Church and scattered the heresies by the mouths of Bossuet and Massillon. France, which shows today the conquering march of Catholicism, as brain after brain surrenders to it, Brunetière, Coppée, Hauptmann, Barrès, Bourget, Lemaître."
"France!" asserted Turnbull with a sort of rollicking self-exaggeration, very unusual with him, "France, which is one torrent of splendid scepticism from Abelard to Anatole France."
"France," said MacIan, "which is one cataract of clear faith from St. Louis to Our Lady of Lourdes."
"France at least," cried Turnbull, throwing up his sword in schoolboy triumph, "in which these things are thought about and fought about. France, where reason and religion clash in one continual tournament. France, above all, where men understand the pride and passion which have plucked our blades from their scabbards. Here, at least, we shall not be chased and spied on by sickly parsons and greasy policemen, because we wish to put our lives on the game. Courage, my friend, we have come to the country of honour."

Of course, times have changed. And Charlie Hebdo isn't exactly Voltaire, is it?