The Book of St Richard, Chapter 9

1. And Richard spake, saying, "None of the existing religions has quite got the true message of Creation, that I am God and alone worthy of worship. So I shall found a new religion, and it shall be called The Richard Dawkins Foundation for Reason and Science." 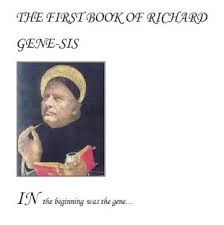 The book of Gene-sis

2. And many multitudes came to worship Richard, yeah, even impressionable teenage girls, who screamed and threw their underwear onto the stage whereon he strode.

3. And Richard said, "This is very gratifying, but I cannot sing, and most of my fans have already heard my famous lecture on Why did the chicken's genes tell it to cross the road?"

4. So he sent forth messengers to search through the collected wisdom of the ages (Google and Wikipedia), to obtain some suggestions for what makes a popular religion.

5. And the messengers returned and said, "Tax-free status. Regular collections of money. Polygamy. Big buildings. Brain washing. Human sacrifices. Hymns. Women covering their entire body in a sheet. Yours could be the first religion to do all these at once."

6. So Richard struggled for many months, and finally obtained tax-free status. For the Charity Commissioners said "It seems to us that you're just a barking mad self-publicist. Why do you not try and be more like Tom Cruise, Sun Myung Moon, Mitt Romney, and other pious saintly men? But we suppose we'll have to let you get away with it."

7. And Richard said, "Indeed, we plan to adopt some of the ideas of other churches, in a secular context. I quite like the idea of polygamy, as although I have had three wives, I have never had more than one at once." 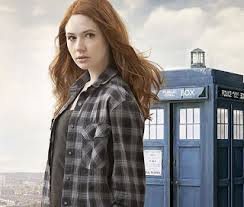 Tipped as a possible "back-up" wife for Richard Dawkins

8. But his third wife Lalla smote Richard with a frying-pan, and he decided that after all polygamy was not a high priority. Likewise, she refused to cover her entire body in a sheet, so he quietly dropped that idea too.

9. And Richard spake, saying, "It is important to educate the masses, that they may be my worshippers all their life."

10. "Let me present the DAWKOTRON, which will cleanse the brains of my disciples, the Dawkies, from any lingering thoughts of other religions." 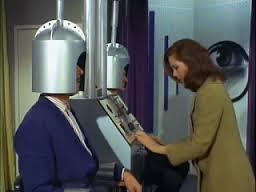 11. And Richard launched an online shop, dawkins.ripoffs.com, wherein the faithful Dawkies could buy relics of their god.

12. And he sold recordings of his inspiring speeches: "I have a meme" (Hitchens's Bar in Washington D.C.), "I have nothing to offer but blood, sweat, and tears - here's my DNA sample" (Scotland Yard interview room), and "Government of the genes, by the genes, for the genes, shall not perish from the earth" (Gettysburg Lunatic Asylum).

13. Then there were shirts, ties, strait-jackets, and saucy underwear, all tastefully embroidered with the motto of the Foundation. 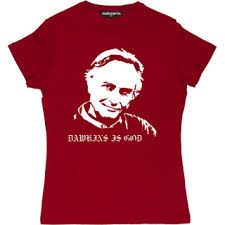 14. And Dawkins looked the the finances, and lo! they were very good. For his latest book The God Confusion had been translated into 94 vibrant languages, including Ancient Macedonian, Paleo-Norman and Crimean Gothic, while The Dawkins Cult was attracting many worshippers anxious to be parted from their money.

15. So that all The Dawkins Cult lacked to make it a proper religion was a temple, and some catchy hymns to sing. As we shall see.