NO 5: how to receive Communion

In our guide to modern practices, written with the shocked traditionalist in mind, we have reached the point where you may receive Communion. The actual words for the consecration may have been a little unfamiliar, and recent news from the Franciscan Friars of the Immaculate suggests that Elvish, Esperanto or Klingon may soon become more common than Latin. However, it is usually fairly clear - possibly by the ringing of a bell - when it is time to receive. 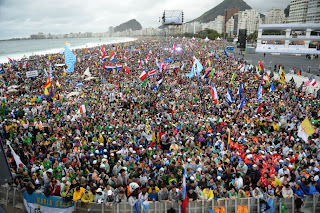 Now, can you please form an orderly queue?

In many EF Masses I have attended, people pile out of the pews, knocking over the weak and feeble, so as to be first up to kneel at the altar rail. This wouldn't work in an OF Mass, for, as likely as not, there is no rail, just the priest and a helper - maybe a deacon, or, if he's indisposed, an old lady - standing in front of the altar. If you rush up to the front you may well knock over the old lady, and this is a BAD THING. If you bump into the deacon he'll probably flatten you.

So probably, "aeroplane etiquette" is safest. The people from the front pews step into the aisle first - this may well include the organist, the guitarist and the girl with the out-of-tune flute - and then people come up, a pew at a time. (Of course things work slightly differently if the aeroplane happens to be on fire.) Usually you will end up tripping over the hand-luggage of anyone who chooses to stay in their pew at this time. 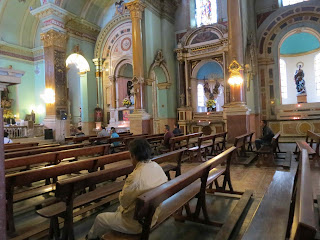 Please don't all rush up at once.

In busy and disorderly masses, there may be several places where you can receive - random helpers will loiter in various corners of the church and, in the confusion, you may find yourself offered the Cup before the Body. I have not been able to find out whether it is a sin to accept, but try not to do it, anyway.

If you are used to kneeling and receiving Communion on the tongue, then forget it. Apparently, Vatican II was very keen on stopping this practice. Kneeling is out. Give it another ten years, and genuflection will be out too - the custom will simply be to give a little skip as we face the altar.

Probably, there'll be a hymn sung while you receive. If the organist starts too soon, it'll be a solo from him; if he leaves it too late, then it will probably continue until well after Communion is over, and the priest may be obliged to come across and force him to stop. 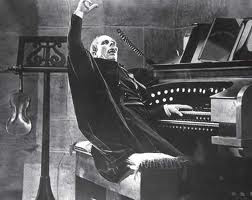 Well, that was the most sacred moment in the Mass, and deserves to be treated with respect. On the other hand, you may be lucky enough to have a South American bishop present, and then you can be sure that things will go with a swing.

Getting down with the "yoof".