It has become something of a matter of pride to be blocked on Twitter by George Galloway, Even Tom Chivers managed it by tweeting "booooooooooooooo" at him, which will probably even get him sued. George is a much-misunderstood fellow, who managed to make friends wherever he went, especially if it was Saddam Hussein's Baghdad or a Hamas knees-up. Not many people know that he is a talented cat-impersonator and an expert on forced marriage. Will he be re-elected as Respected MP for Bradford West? Well, that all depends on whether he captures the Jewish vote. 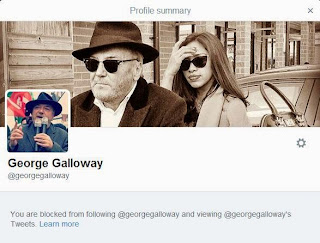 Most likely to say: "Many of my best friends are Israelis."

Still, I have managed to get blocked by many on Twitter in my time. The roll of honour includes another great hero of mine, Richard Dawkins, the distinguished zoologist, theologian, poet and moral philosopher. Originally an expert on chickens, he has now diversified his interested into selfish genes, blind watchmakers, and deluded gods. Professor Dawkins understands that to be a good scientist, you have to have a spiritual dimension to your life. He is a deeply sensitive man, who is anxious never to give offence. If he stood in Bradford West, he would certainly have many Muslims supporting him. 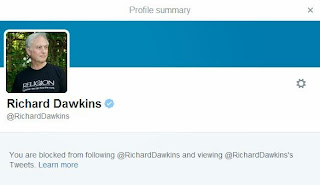 Most likely to say: "Of course, I'm probably wrong."

Many people will be surprised to know that I have been blocked by Professor Tina Beattie, the well-known professor of Money, Life and Health (or something like that). Tina is a Catholic after my own heart - well, after her own heart, actually - and from her I have learned many things about the Catholic faith that no priest or bishop would ever dare to tell me. Her ground-breaking God's Mother, Eve's Advocate, is probably the only book on theology that I could recommend to people who enjoyed Fifty Shades of Grey. O Tina, tell me it was just a misunderstanding!

Correction: I am not blocked. But I thought I was... 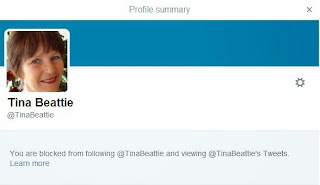 Most likely to say: "The important thing is to remain true to Catholic teaching."

Even more puzzling is my cold-shouldering by Damian Thompson, the Spectator's publisher for Religion, Society and Human Flourishing (or something like that). In the good old days of Telegraph blogs, when Friday night was sock-puppet night, we found that we had many common interests, such as Catholicism, custard, and the oeuvre of Gladys Mills. To add insult to injury, once the organ-grinder had spurned me, so did the monkey (Paul Priest), a man considered to be Corby's answer to James Joyce. 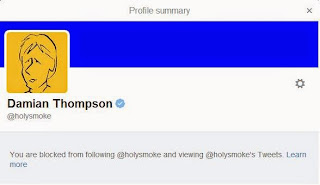 Most likely to say: "I think of Cardinal Murphy-O'Connor as my mentor."

And so it goes on. The Diocese of Lancaster blocked me after I constantly praised its bishop's tough line on bloggers. Stephen Fry was so embarrassed by my description of him as the cleverest man of this age or indeed any age, that he humbly blocked me. On the other hand, Catherine Pepinster, Polly Toynbee and Giles Fraser - people who provide me with much quiet amusement - still haven't blocked me, so perhaps there is some hope that they can be saved. Oh, and this man hasn't blocked me, either: indeed, quite the reverse!