Is it still safe for Catholics to laugh at Father Vin?

Reprinted from the Catholic Herald.

Six years on, the popular sitcom "Father Vin" continues to divide Catholics. Telling the tale of three useless clerics marooned on the remote island "Britain", some have seen it as a mockery of Catholicism, while others see it as brilliantly slapstick, surreal and childish. 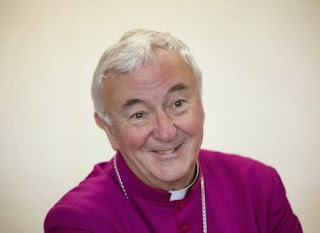 Crucially, the ludicrous characters are the butt of the jokes, rather than precious elements of the faith. The humour is gentle, and all "Father Vin" fans have their favourite episode. For some, it is the one where he goes to a synod and can't remember how he voted. For others, it is the embarrassment he suffers when he discovers that "gay" masses are taking place on his doorstep. Yet again, others will remember the difficulties Vin gets into when he tries to silence 500 Catholic priests, only to be reminded that the Pope wants "dialogue". 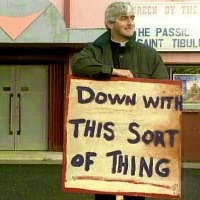 Of course "Father Vin" contains other memorable characters. We have all laughed at the rather dim Fr Timothy Radcliffe, who is totally unable to understand some aspects of Catholic teaching on sexual matters, and Mrs Beattie, the tea lady, with her "Try another heresy, Father, go on, go on, go on!" However, our personal favourite is the disgraced Father Kieran, with his fondness for DRINK and GIRLS. 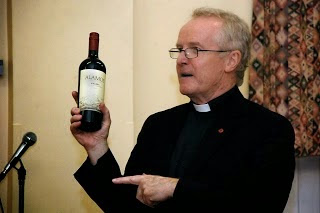 Perhaps the most popular of all episodes is the "Kick Cardinal Cormac up the backside" story, in which Father Vin is told that the only way that he can become a cardinal is to "give the boot" to his predecessor. Watch this sort of superlative comedy, and you will never wish to say "Down with this sort of thing!" 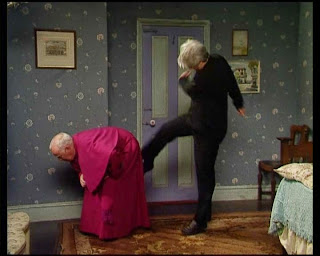 A bad day for Cardinal Murphy-O'Connor.