The Book of Brexodus, Chapter 3

1. Then there came a great leader from the Western Lands, whose name was O-bam-a.

O-bam-a uttereth threats, yeah, even unto the fourth generation.

2. And O-bam-a spake, saying "I have a special relationship with the children of Britain. I love them, even as Les Dawson loved his mother-in-law."

3. "But should ye flee the land of EUgypt, then the first shall be last, and the last shall be first: that is to say, ye shall be at the back of the queue when it cometh to trade deals."

4. "No longer will ye be able to feast on the Cola that is Coke, nor the Mac that is big. Thus will ye starve."

5. And the people of Britain grew wrathful, saying, "What manner of man is it, that dareth to speak thus? And in six months from now, will not the Western Lands be ruled either by the Trump or the Clinton, whose only virtue is that they are not O-bam-a?"

6. Thus Cam-aaron's plan to keep the children of Britain in the land of EUgypt had taken a backward step.

7. Soon after this, his brother Bosis abandoned the city of Lon-don, where he was Governor. Thus the children of Lon-don appointed Sadiq Khan, the son of Genghis, to rule over them in his stead. 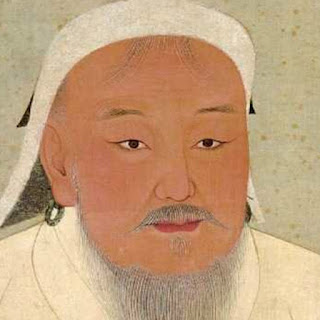 Khan, son of Genghis. Or possibly George, he that is called Galloway.

9. "Woe unto ye if ye leave the land of EUgypt," said he. "For if ye do, there will be a great war the like of which ye have not seen before. The Assyrian will come down like the wolf on the fold."

10. "Further, the Hittites, the Thumpites and the Bashites will hit ye, thump ye, and bash ye."

11. "Also the bodysnatchers from outer space, the Klingons, the Daleks, and the triffids, shall join in a mighty war. Not to mention the Germanites." 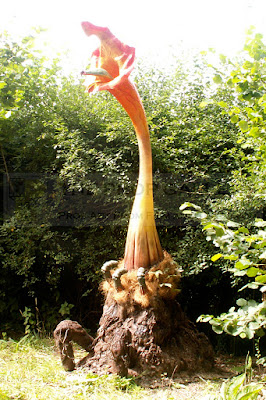 A triffid prepareth to smite the unwary children of Britain.

12. And there, perhaps, he had a point. For the Germanites were clearly waiting for the children of Britain to leave EUgypt, so that they might smite the Franks again, as they had not done this for a few years.

13. But the people of Britain replied unto Cam-aaron, "Have a lie down, thou fool, for thou hast been working too hard."