We strongly recommend this video by Emily Clarke, which has been produced in honour of Pope Francis, due to visit Ireland next year to see whether there are any Catholics left there. It shows the best of modern Catholicism, pushing aside Jesus Christ in favour of an unqualified adoration of the Holy Father.

According to the lyrics, "The Lord kept his promise to us and sent us a treasure to see us safely home." This treasure being, er, the pope. 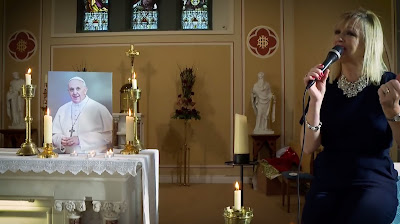 Of course the pope, being a humble and modest man, has angrily written to sister Emily to tell her to delete her video, which anyone but the most arrogant of people would find rather embarrassing. Luckily, we still have some screen captures to see us safely home. 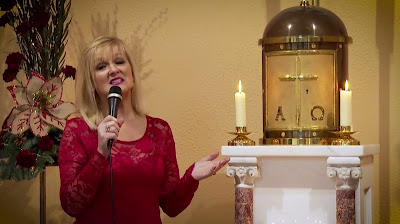 A quick change of dress mid-song, and we pose in front of the Tabernacle.

Actually, dear Emily may not have changed her dress in the middle of the song; it may be a trick of the light, like that ambiguous dress which, according to the Daily Mail, has "divided the Internet" because nobody is sure what colour it really is. And nobody really cares. 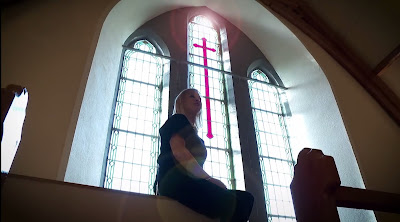 The first ascent of the north face without ropes. And another change of dress.

According to the song, the pope was chosen by God, as a leader for our times. Well, it was either God or the St Gallen Mafia, and we still haven't sorted out all the contradictions in the apostolic exhortation Austenis Iveria. But let's be charitable and suppose that the Holy Spirit spoke through Cormac Murphy-O'Connor when Francis was chosen. 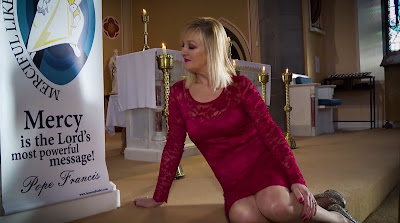 Very dignified. Very tasteful. Oh, and the dress - what there is of it - is red.

Well, thank you very much, Emily. We'll let you know.

For those whose collection of Pope St Francis memorabilia is still not complete, we have another exhibit. 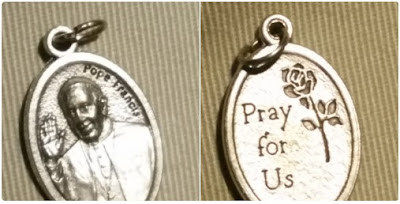 Well, that's enough papalistic adoration for now. In fact, the medal I was given says "Insult us" on the back, and that does seem to be a more likely prospect.

However, we can report that the crisis involving the Knights of Malta seems to have been resolved. You will recall that it had reached an impasse, with the conversation reduced to "You have no authority to judge us." "Oh, yes we have!" "Oh no, you haven't!" etc. Finally, following my personal intervention, we have a solution. 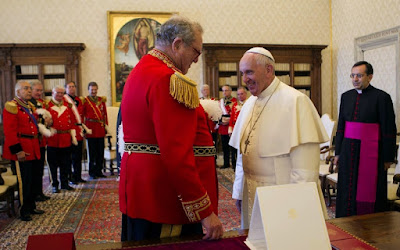