An Appetite for Wonder

We are delighted to be able to print an extract from Richard Dawkins's new book An Appetite for Wonder, the first instalment of his long-awaited autobiography.

This bug in a jar proves the non-existence of God.

From an early age I realized two things:
1. I am the cleverest person who ever lived, even greater than my hero Charles Darwin.
2. God does not exist.

You can keep all your great thinkers and philosophers: Aquinine, St Augustus, Decarthorse (memo: check names). They weren't fellows of New College, Oxford with their own Foundation. Nowadays, nobody has heard of them, except the Regius Professor of Divinity, and what does he know about the personal hygiene of flies? Well, there you are.

At school I won all the prizes: the Mrs Joyful Prize for Raffia-Work, the Charles Darwin Prize for Cricket (my essay on "why crickets don't need bats" was reprinted in the school magazine), and of course the Victor Ludorum Prize for the largest brain, measured at Standard Temperature and Pressure. 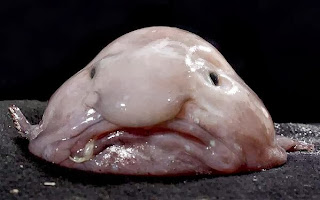 Would a loving God have allowed such an ugly fish to exist?

Where was God in all this, you may ask? Was He there when I called upon Him, at the age of five, to strike Nanny with a thunderbolt? No, all He gave her, in answer to my prayers, was a slight sniffle, and that would probably have happened anyway after I poured lemonade down her neck.

Darwin is really cool, don't you think? He debated with his critics in a masterly way. I admire the fact that he used to make public pronouncements saying that all Catholics were "vile"! Why on earth didn't they give him a knighthood? Come to think of it, why on earth don't they give me a knighthood? Or, better still, a peerage? I can trace my ancestry back to Sir Richard Dawknobs, the 18th century composer, who many said was greater than Handel. (See pages 48 to 61 for my family tree.) 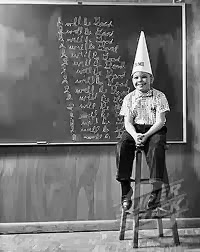 At school they gave me a special cap to wear.

The secret to life, by the way, is genes. And memes. And - a new hybrid that everyone has missed - gnomes! Basically, a human being is just a gnome's way of making another gnome. And you can never have too many gnomes. Gnomes are denizens of geological time: gnomes are forever. 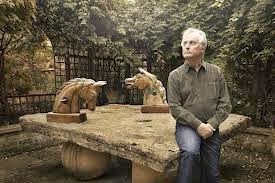 In Volume 2 - how the Catholic Mafia sent me horses' heads.