As a result of a stiff letter from the Judaean Popular Front for Church Reform demanding an abolishment of the Catholic hierarchy and the ordination of women and homosexual priests, Pope Peter has stunned the Catholic world by agreeing to all the demands made. 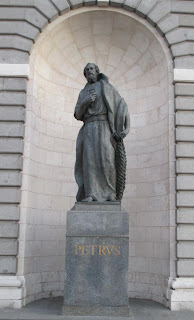 ... and someone else can look after these keys: I'm always losing them.

Said the Less-holy-than-before Father, "In fact the demands of the JPFCR seemed to be entirely reasonable. I'm happy to step down as Pope and just return to being a humble fisherman who dabbles in religion occasionally. I've sacked the other 11 disciples, who frankly can get a bit irritating sometimes, especially Doubting Thomas: the man is a bit of a loose cannon, always giving embarrassing interviews. So from now on it's every man (and of course woman, and anyone who is not sure) for himself or herself. Well, at least it gets me out of a probable martyrdom."

Do-it-yourself Holy Scripture. Throw these tiles into the air and see what teaching is revealed.

The Judaean Popular Front for Church Reform is a major dissident Catholic group, incorporating, amongst others, A Call to Actions of the Apostles, Call for Women Apostles, Call to Disobedience, Call Me A Cab, and Call Me Dave (the campaign for homosexual "marriage"). It is now somewhat nonplussed, as all its demands have been met in full and the Catholic Church has imploded.

Said Robert Blair Caesarea, one of the leaders of the JPFCA, "We were hoping to see the ordination of women apostles, but now it seems that there won't be any apostles at all, not even directly-elected ones produced as a result of a modern democratic process involving extensive fund-raising, costly advertising campaigns, primaries, and finally a bit of subtle vote-rigging." 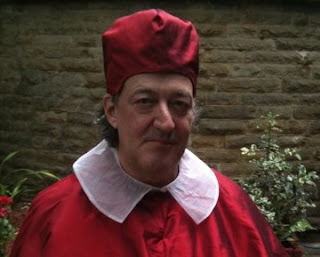 So where next for the Catholic Church? Some "traddy" Christians are saying that it might be a good idea to have a common core of beliefs, but their first mission statement, "NOLITE PECCARE" (do not sin), was rejected as being hopelessly out of date in 1st century Judaea. It has since been modified, after consultation with JPFCA to "IMPOSSIBILE EST PECCARE" (it is not possible to sin), which certainly makes everyone feel better all round. 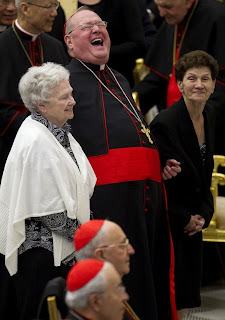 The ex-Apostle Timothy reacts to a woman "priest".