The holidays are over, and term has restarted, so we welcome back our audience of theological novices to the Eccles Bible class. 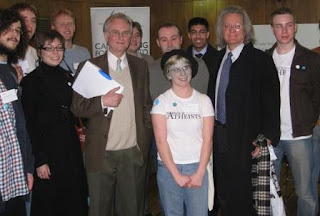 Some of our more promising students, ready to learn!

I'd better start with the register, then.
Dawkins? Here. Hope you had a good holiday, my boy, and didn't get into too many Twitter fights. New pot-boiler selling OK? Splendid.
Grayling? Here. Get a haircut, boy.
Fry? Whoop! That will do, child.
Toynbee? Here.
De Botton? Stop sniggering, Fry, I didn't say "bottom". An adequate evolution of morality from superstition to reason should mean recognizing ourselves as the authors of our own moral commandments. All right, that will do, de Botton. You've not been paying attention, have you?
Sanderson, Hari, ... stop fighting, Kamm, ...
Conry, what are you doing here? You want the Orthodox Catholicism for Beginners class next door. All right, we're quorate. Let's get started. 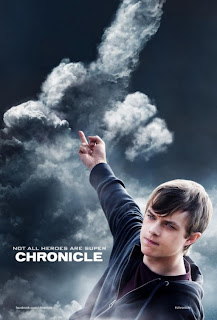 Well, class, you're going to have a very easy ride today. It's another of those books about Jewish history with a rather low "spiritual nourishment" rating. Also, a lot of it is plagiarised from other books. Ah, I thought you'd be interested, Hari.

The first 9 chapters are mostly lists of names, as I've just indicated. Something like the Tel Aviv telephone directory, but without the numbers of course. Then we get on to history, most of which is covered in earlier books. We get the stories of Saul and David once more. Since you all know about this, we won't go into it again. However, we come to deep questions such as this one:

Is there a contradiction between 2 Samuel 24:9 and 1 Chronicles 21:5, when the number of soldiers Joab counts comes up different?

Well, not really. You know how people never stand still when you're counting them. And anyway, the wording is slightly different. So, Dawkins, I'm afraid that you can't use this as a stick to condemn the Bible as nonsense. Although you probably will, anyway.

Who wrote Chronicles? Quite possibly, Ezra, who turns up later in a book with his own name on. Experts decided this by comparing styles. It's what you might call a sockpuppet for Ezra, anyway. 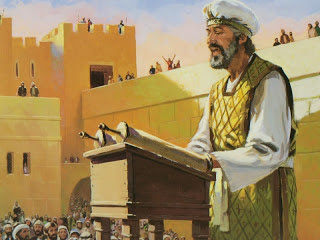 Well, one commentary I have read (don't think I make all this stuff up myself) explains that Kings gives us man's viewpoint, while Chronicles gives us God's viewpoint. You'll have to sort that one out yourselves.

There are some rather strange passages, even in the narrative parts; for example, And Satan rose up against Israel: and moved David to number Israel (Chapter 21). Who would have thought that censuses could be evil? 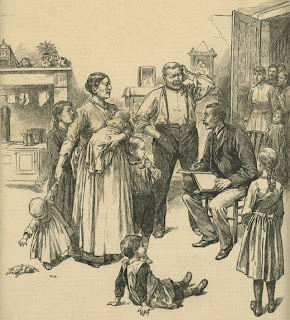 Hazlelponi? There's nobody of that name here.

Ezra is on safer ground when he's copying out lists of names, so let's finish with one of his more sparkling passages, which, nonetheless, no priest is likely to take as a text for his sermon: Now the first lot came forth to Joiarib, the second to Jedei, The third to Harim, the fourth to Seorim, [a few lots deleted here], The three and twentieth to Dalaiau, the four and twentieth to Maaziau (Chapter 24).

O.K., class dismissed. 2 Chronicles next time, then we'll get Ezra's own story. 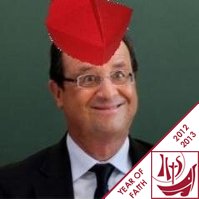 Oh, and Hollande, don't wear that silly hat next time.