On his visit to Mexico, Pope Francis has praised the culture and traditions of Mexico's indigenous people, and condemned the interference of Europeans. 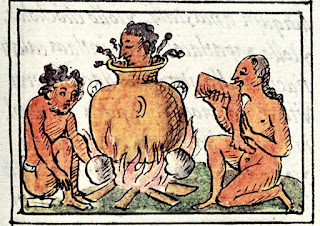 Who are we to judge?

"In my trips round the world, I have found common ground with many non-Catholic religions," said the Holy Father, "including the Russian Orthodox, the Lutherans, and even the Muslims. Now is the time for dialogue with the Aztec high priests."

The Pope went on to condemn the European invaders who had suppressed the traditional Aztec religion and imposed Catholicism. "You may say that human sacrifice and cannibalism are nasty 'traddy' rites, and contrary to the Spirit of Vatican II, but in this Year of Mercy we should recognise that the Catholic Church is big enough to embrace these old traditions."