Am I bringing joy into my life?

Having seen Pope Francis's ten tips for bringing joy into one's life, I thought I'd see how well I was doing, and, in cases where there was room for improvement, who I should take as my role model. If anyone wants another ten tips, then look here. 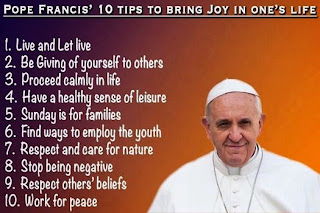 Attempt all of these.

1. Live and let live. I'm not very good at this, frankly. When I read of massacres in Iraq (for example), I do start getting annoyed, even though strictly speaking it's none of my business. Perhaps David Cameron (last seen staring at dead fish in Portugal) is a good role model for this one.

2. Be giving of yourself to others. I'm writing this blog, am I not? This is my mission to the slightly-saved, that they may become more-saved. I think I get a mark here. 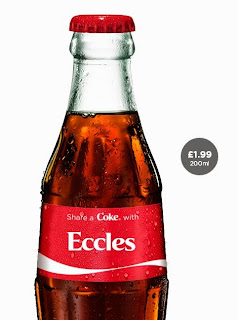 Not going to lose my temper, but it was an Eccles cake I ordered.

6. Find ways to employ the youth. Anyone who makes approaches to youth, saying "Would you like to earn some money, little girl?" is likely to end up being questioned by the police. For similar reasons, I suppose, boy scouts no longer offer a "Bob-a-Job" where they would clean the car, cut the hedge, walk the dog, tidy the kitchen and cook dinner, all for the sum of 1 shilling (5p). So I fall down dismally here. Who is my role model? The Guardian, which employs Owen Jones (age 8)? 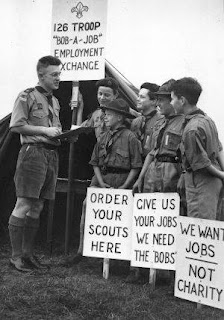 ... and the Guardian is looking for a left-wing feature-writer.

7. Respect and care for nature. Yes, on the whole. Respect, rather than reverence, or worship. So I bow to cabbages, but do not genuflect in front of them. I retrieve lost-looking spiders from the bath, and put them in my aunt's bed. Yes, full marks here.

8. Stop being negative. No, I won't! Ah... that was a trap, and I fell into it. All right. From now, I'm just a boy who cain't say "NO", so my role model is Oscar Hammerstein II, who wrote these words for Oklahoma!

9. Respect other's beliefs. This is a toughie. Where do we draw the line? Atheists? Muslims? Satanists? Mormons? Baptists? Perhaps I get half a mark for ecumania here, as I get on rather well with some (but not all) Catholics, Anglicans and Baptists, for example. Perhaps we need to look to Cardinal Nichols, who offered flowers at a Hindu altar. Cardinals are never wrong.

10. Work for peace. This is one I understand, and appreciate. How sneaky of the Pope to slip in something Christian at the end! 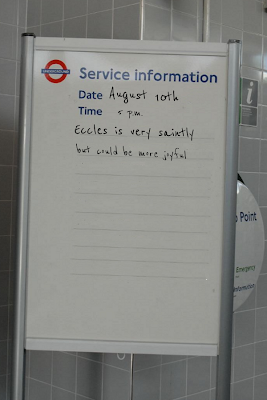