The Book of St Richard, Chapter 19

1. Richard Dawkins was now in the seventy-fourth year of his age, and the time came for the Lord to convey a great blessing on him.

2. For an angel descended unto him and spake, saying, "Richard, it pleaseth the Lord that thou shalt be granted infinite knowledge; but beware, for wisdom followeth not upon great knowledge." 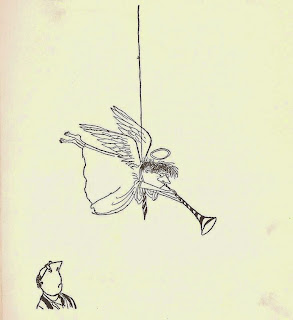 3. And Richard said to himself, "The angel speaks the truth. For without having undertaken any study I am become an expert in theology, yeah, and literature, yeah, and psychiatry, yeah, and moral philosophy."

4. For he was invited to speak at famous literary festivals, such as those at Hay-on-Wye, and Holt in the land of the Norfolkites, at which he was lionized as a literary expert.

5. This was indeed remarkable, as Richard had written no literature other than the comic tale of the God Delusion, which tells the tale of a man who always getteth the wrong end of the stick.

6. Still, he spake as an equal with the learned doctors, such as Melvyn, he that was known as Lord Wigg of Bragton, or possibly Lord Bragg of Wigton, a man who had read every book in the library of the Britons, which is at St Pancras. 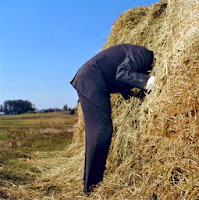 In order to make a point, Richard seeketh for a needle at the Hay festival.

7. Next, it came to pass that Richard tweeted unto the world, saying: "I don't hate Catholics, I don't hate Protestants, I hate the hereditary mental illness called religion..."

8. And the doctors of the mind were sore amazed, for they said, "It is true, we knew not of the mental illness of Jesus, and St Augustine, and Thomas Aquinas, and Thomas More, and Joseph Priestley, and Louis Pasteur, and Gregor Mendel, and James Clerk Maxwell, and..."

9. "Surely, this man Dawkins hath revolutionised the science of psychiatry?" 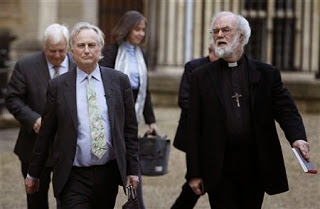 I'm a little disappointed that you should accuse me of mental illness, Professor Dawkins.

10. And finally Richard decided to put forward a new moral philosophy, known as Dawkins' Theory of Relativism, which shows how the human mind becomes more narrow as the rate of its utterances approaches the speed of light.

12. However, were a man to come unto him, saying "Father Dawkins, I have mildly ravaged someone. Wilt thou endorse my actions?" Richard still undertook to reply "Nay."

13. For such were the rules of logic. 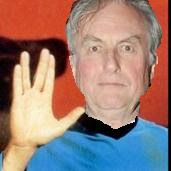 We come in peace. Shoot to kill... mildly.

14. And many who had looked kindly upon Richard, such as Shami of the Chakrabartites, said "Lo! Richard has gone too far. He may be a man of great knowledge, but he is not as wise as a serpent, rather he is as foolish as the virgins who took not oil for their lamps."

16. For it is written that a prophet is without honour on Twitter.