After a hard week attacking rebel Catholics, bad hymns and Dan Brown, what could be nicer than to curl up on the sofa with the book of Deuteronomy? This is part 5 in the Eccles Bible project, where we lead an atheist called Richard to salvation. We are looking at the last book of the Torah/Pentateuch: the word Deuteronomy actually means Second Law, which suggests that someone has miscounted. But never mind.

Deuterium. Not to be confused with Deuteronomy.

Right, let's dive in. We've got 34 action-packed chapters ahead of us. We start off, however, with three chapters of general smiting, and for some reason things go particularly hard for tall people. For example, Moses and his team kill Og of Bashan, the man with a true king-sized bed, 9 cubits by 4 cubits, which is made of iron. 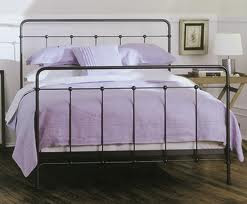 Og of Bashan's iron bed (or perhaps a smaller version of it).

Moses then preaches a few sermons to the Israelites. They are unlike the modern sermon from a church leader, which goes something like this:

"As I was wandering in the desert this morning looking for any men from Heshbon that we might have forgotten to smite, I saw a vulture perching on a rock. 'Squawk, squawk!' he said to me, and I burst into tears, for it reminded me that we are not allowed to eat vultures. In the words of the poet: In for a penny, in for a pound – It’s Love that makes the world go round! Nowadays, we are faced by many real challenges, such as climate change, the need for more wind turbines in the desert, the demand for gluten-free manna and ethically-sourced quails, and of course an end to smiting people on the grounds of race, colour, religion, sexual orientation, or favourite football team. But God loves us all. There will be coffee on Mount Sion after the service." 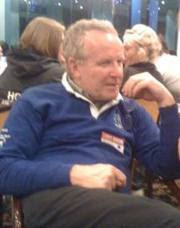 Do not smite this man just because of his footballing beliefs.

No, Moses gets straight to the point and reminds people of the ten commandments; also he explains that they are going to attack all the followers of false gods, and smite them. This is not exactly what you might call "muscular Christianity": they weren't Christians at that stage, and anyway muscular Christians don't really smite people. 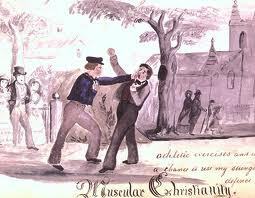 Well, regrettably this is one of the more bloodthirsty bits of the Bible, but in those times it was quite common for people to fight wars against their neighbours. Thank goodness that's all stopped, eh?

Well, I'm fast-forwarding through the next few chapters, which are mostly repeats of earlier teaching (although the text Ye are the children of the Lord your God: ye shall not cut yourselves, nor make any baldness between your eyes for the dead, from Chapter 14, verse 1, would repay further study, especially by anyone who feels temped to make some baldness between their eyes. 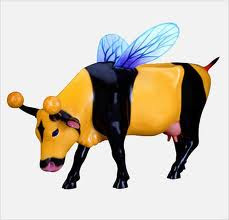 They're heading for a land flowing with milk and honey.

By the time we get to the end of the book, Moses is now very old; he hands over the reins to Joshua, gives some blessings, takes a look at the promised land, and dies.

If you have been paying attention, Richard, you will notice that the Bible so far mixes legends (with some underlying historical basis), solid history, and the Mosaic law. Next time, we'll look at Joshua's career. Mosaic law - lots of pieces that fit together.