The Pilgrim's Ogress 2 - Dr E and the Tableks

The story so far: the pilgrim Eccles and his Auntie Moly, the ogress, have reached Hammersmith. Today's guest author, the late Terry Nation, takes over the story. 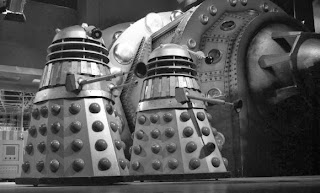 Catherine Pepinster and Elena Curti discuss the next issue of the Tablek.

Dr E and his assistant Mol had reached the Tablek fortress in Hammersmith, with its friendly sign outside: Tablek Headquarters - trespassers will be exterminated. "This may be dangerous," said the Doctor, and he suggested to Mol that she take refuge in the local pub, the Aged ACTAvist. Having introduced her to a large gin, Dr E returned to the fortress, used his sonic screwdriver to open the doors, and entered into a maze of narrow corridors. Was this where he would find the Tablek army, which was intent on domination of the Catholic Church, and even prepared to ally with the hated Küngs and Flanneries in order to achieve supreme power? 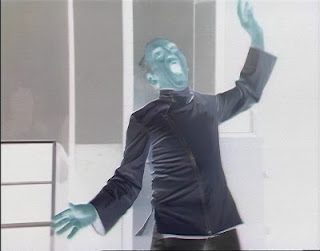 A pious Catholic is incensed by encountering a Tablek.

Dr E ducked into an alcove as two Tableks glided past in conversation: "POPE FRAN-CIS IS OUR SER-VANT. HE WILL CHANGE CATH-O-LIC TEACH-ING. WE DO NOT NEED TO EX-TER-MIN-ATE HIM YET." Was this true, or had the Tableks been fooled as a result of receiving a mass of confusing signals? The Tableks continued: "WHO ARE WE TO JUDGE? WE DO NOT JUDGE. WE EX-TER-MIN-ATE."

Through a window, the Doctor caught sight of a sinister figure in a mobile life-support chair. Could this really be that evil twisted genius who, some said, was the brain behind the Tableks?

Duffros, riding in his life-support chair.

Yes, it was indeed the dreaded Duffros, a man of undoubted brilliance but one of Dr E's deadliest enemies. The Doctor's courage was almost ready to give way, and he thought briefly of returning to the safety of his Traddis (a converted police-box in which traditional worship was held). But the decision was taken out of his hands. An important-looking Tablek had spotted him, and was approaching rapidly, with the harsh cry of "EVES-AD-VO-CATE! EVES-AD-VO-CATE!" 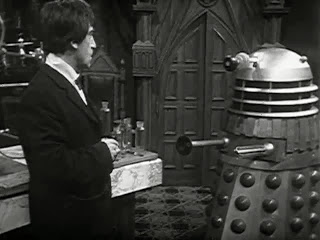