The story so far: Eccles is trapped in the Tablet fortress in Hammersmith, having been locked in a cell by the fearsome Professor Tina Beattie, who is driving him insane with excerpts from her infamous stage show (banned in Clifton and San Diego). Meanwhile, his Aunt Moly is waiting for him in a nearby pub. Agatha Christie continues the story. 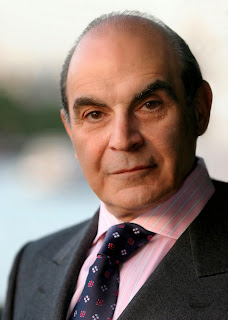 When I've found Eccles, I must discover who stole my moustaches.

Poirot scrutinised the old lady who had demanded his help. Meticulous as always, he straightened the six gin bottles on the table in front of her, and bade her speak. "So, Madame, you say that your nephew has disappeared? Tell me the exact circumstances."

"Eh bien, did he say where he was going?"

"He mentioned tablets. And some rubbish about unsaved persons. Woeful."

To emphasise her point, Auntie Moly picked up an empty gin bottle and threw it through the open window in the general direction of a passing archbishop, who had been furtively heading towards the Tablet offices across the road. The bottle struck the prelate a glancing blow on the head. Exclaiming to himself "My God, there really is a curse on the Tablet!", he came into the pub to recover from the shock. 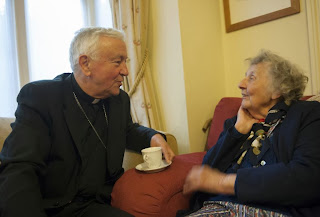 From now on it's tea only, Moly!

"Alors, Hastings, the solution to the mystery lies in that prison across the road!"

"Yes, Eccles may be locked in one of their little grey cells."

The two men left the pub, and knocked on the door of the Tablet offices. In his career Poirot had confronted many villains in their lairs, and he was reminded briefly of the notorious Hans Kong, who frightened young women to death with a hideous statue of himself. Then he thought of the fateful day that he had finally caught up with Annibale Bugsbunni, the alleged freemason who had been exploding liturgical time bombs. 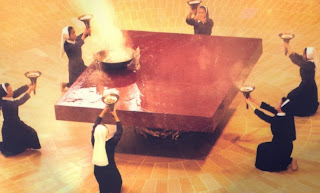 Worshippers from the cult of Bugsbunni.

"Sacré Pepinster! They do not answer, Hastings. Let us search the premises."

Eccles was still a captive, and he was looking for a ventilation shaft, having read somewhere that this was the standard means of escaping from imprisonment. However, there was none, and the sulphurous fumes wafting round the building were causing him to choke.

Elsewhere, Poirot and Hasting came across a group of Tablet staff, attempting to calm Elena Curti, who was screaming as if in great pain. 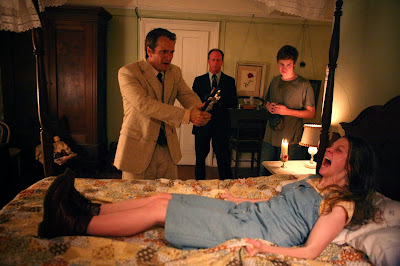 "Good grief! Is she all right, Poirot?" asked Hastings, seeing the star journalist writhing in agony.

"I think so, mon ami," replied his friend. "She is possessed by the Spirit of Vatican II, but she has just learned of Pope Francis's condemnation of the hermeneutic of rupture. It is causing a terrible reaction."

Leaving the Tablet staff to do their best for the poor lady, Poirot and Hastings moved on to the cell where Eccles was imprisoned, and released our hero.

"That wasn't much of an adventure, Poirot," complained Hastings. "I was expecting the Tablet staff to provide you with some clues to Eccles's whereabouts."

"That is right, Hastings," said Poirot, as the three of them left the building, "but in the end they all turned out to be totally clueless." 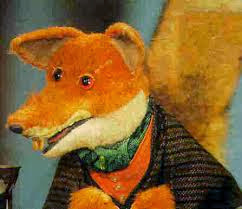