The Church of England today became history, er sorry, made history, when it appointed its first female bishop, Mrs Looby Loo. Traditionalists - those who had not yet fled to become Catholics, Orthodox or Muslims - had hoped that the announcement that it was possible to appoint women to such positions was enough to satisfy everyone, and like the nuclear deterrent, it was a threat that never actually needed to be exercised. 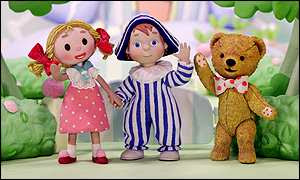 Mrs Loo has had a strong media profile since she appeared regularly on television with fellow-clerics "Andy" Pandy and "Teddy" Bear; indeed, the fact that the three of them lived together in a picnic basket was once regarded as something of a minor scandal in church circles. She is also celebrated in a well-loved Anglican carol, to be found in the best-selling hymn book Hymns Ancient, Modern, Postmodern and Downright Silly:

Mrs Loo today declared herself "overjoyed" to be appointed Bishop of Stockport, saying "I am delighted to be the first rag doll ever to promoted to the grade of bishop (except possibly for George Carey), and I look forward to seeing other characters from children's programmes taking their rightful part in the management structure of Anglico PLC." 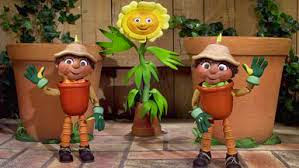 The Rev. Weed, with her two deacons.

A hot tip for the next female bishop is the Reverend Weed, who is tipped to be become bishop of one of our "garden cities", possibly Letchworth or Welwyn. When asked for her views on today's announcement, she modestly cried "Weeeeeeeeeed!" and refused to elaborate on this statement. Her deacon, Bill (or was it Ben?) was more outspoken, saying "Flobadob-a-wobadob-a-flobadop", which one may take as a definitive comment on the whole issue of women's ordination.