How to be a saint

If you are a regular reader of this blog, then obviously you are clearly slightly saved already. However, you may be interested in something better, namely, the reassurance that you will be heading straight for Heaven when you die, without any intermediate steps such as Purgatory, a Last Judgement (which could be very disagreeable, even if at the end you scrape through with a "Not Guilty" verdict), or anything else you might see as a possible hazard en route. 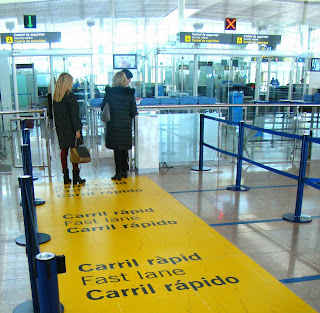 Two saints turn up at the Pearly Gates.

The first thing to remember is that saints are not actually saintly people. Consider the case of St Dismas, the "good thief". Along with his mate Gestas, the "bad thief", he made a complete nuisance of himself in 1st Century Palestine. With his mask, his striped jersey, and his bag marked "SWAG" - an unusual sight in Judæa - he would break into houses and steal primitive computers - Amstrads, probably - or pick pockets. Luckily, they never tried this on Jesus, who would have detected it instantly, as He did when the woman touched His cloak. Still, at the end (admittedly very painful for him), Dismas said the immortal words "It's a fair cop" and ended up in Heaven.

Moving on a bit, we come to St Augustine, with his famous saying, "Grant me chastity and continence, but not yet." I know we live in a "who am I to judge?" era, but I really don't advise you to try this bit of gradualism at home. Augustine converted to Christianity at the age of 32: since he lived to be 75, he behaved himself, more or less, for 43 years, and just spent his spare time blogging. Incidentally, his mother was also a saint (Monica), but in general such titles are not hereditary. So we have here a different way to sainthood, and one more suitable for most of my readers, who are not thieves, as far as I know.

My third and last case study is Pope St John-Paul II. Like Dismas (on a Very High Authority Indeed) and Augustine (by Popular Acclaim), John-Paul was canonized very quickly - 9 years after his death - and the fact that he made it to pope may have had something to do with this. But even John-Paul did some startling things. 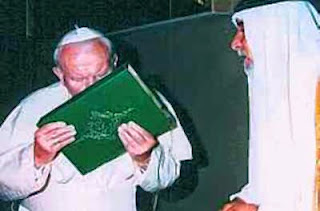 Kissing the Koran. DO NOT TRY THIS AT HOME.

We never got to the bottom of this story. Perhaps it was just John-Paul's habit to kiss any large book that came his way, whether it be a Bible, an Encyclopædia Vaticana, or even a humble telephone directory. The last is not such a bad idea, actually, as it may be interpreted as blessing all those within, yeah, even from brother A.A.A.A.0.0.0.Dyno-Plugg, the plumber, right through unto the blessed Zzygmunt Zzzzzzuhlsdorf of the Magic Circle (available for parties, weddings, and bishops' conferences). Still, kissing a Koran is something we do not generally advise.

John-Paul was of course a better man than we are, and has even been recognised to have performed some post-mortem miracles. Still, his route to sainthood is a hard one to follow, if only because we cannot all be popes.

Conclusion: I still haven't worked out a thoroughly reliable recipe for sainthood. More later, after I have consulted my brother Bosco, who is undeniably a saved person. 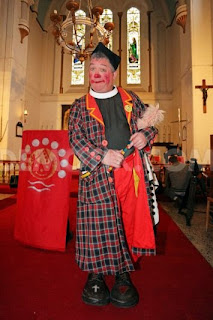 Could this be the way to Salvation?