Our predictions for 2013 were pretty much on target (we didn't repeat the exercise for 2014), so here is what is expected to happen in 2015.

January. ISIS troops run away in terror from an army of little old ladies. David Cameron celebrates this victory - for which he takes the credit - by going on yet another holiday to foreign fish-markets. 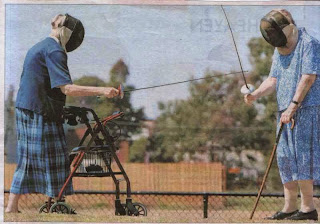 February. Bishop Campbell discovers that Deacon Donnelly is still spilling the beans about bad behaviour in the Catholic Church, even though his "Protect the Pope" blog is closed down. He confiscates the deacon's laptop and telephone, places him under house arrest, and warns him to talk to nobody. Donnelly continues to proclaim the Catholic faith by means of smoke signals from his chimney.

March. Cardinal Dolan attends the New York St Patrick's Day Gay Pride March. Rather than look ostentatious by parading in full clerical dress, he disguises himself as a golfer (see below). 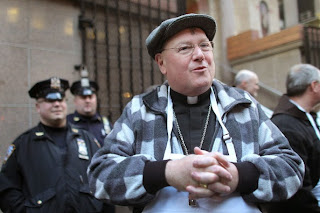 April. Tony Flannery, the "silenced priest" is encouraged to go on a retreat to a Trappist monastery. However, he is thrown out after two days because he refuses to stop talking. He blames the Vatican.

May. Pope Francis welcomes a party of disabled children to the Vatican. In a three-hour harangue, he lists 94 faults that they are guilty of, and reduces the entire class to tears. At the end he concludes "Who am I to judge? I'm the pope, that's who I am." 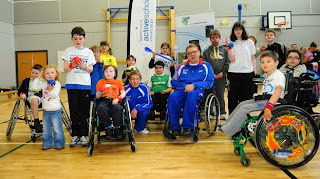 Preparing to meet the pope.

June. Paul Inwood makes a desperate bid for recognition as a respectable composer by releasing his "Rest" (the word "Requiem", being in Latin, is unacceptable to him). After hearing the opening chorus "Eternal Rest, zzz, zzz, Eternal Rest", critics suggest that he take out all the notes and replace them with rests.

July. Arundel and Brighton hosts a "Woodstock II" happening to celebrate the 50th anniversary of the diocese. Kieran Conry asks if he can bring his "plus two" with him, but this is refused. With Rowan Williams, Cormac Murphy-O'Connor and Timothy Radcliffe as guests, the organizers realise that they are a little short of Catholics, and invite Hans Küng, Tony Flannery and Tina Beattie as additional speakers. 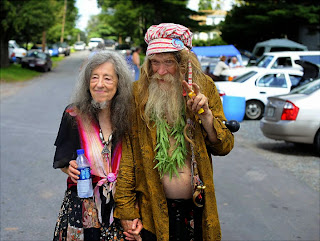 Distinguished speakers arrive for the Arundel and Brighton happening.

August. The Church of England is accused of "institutional sexism" as it is revealed that it has not had a male Supreme Governor for 63 years. Prince Charles offers to take over, with the title King Ali Krishna Siddhārtha Charles, defender of all faiths except Catholicism, but in the end Goodish Queen Bess continues as before.

September. Pope Francis publishes a biography of Austen Ivereigh, the great reformer, suggesting that Cormac Murphy-O'Connor had a hand in his election as head of Catholic Voices. A clarifying statement is issued soon afterwards, confirming that Ivereigh himself knew nothing of this. 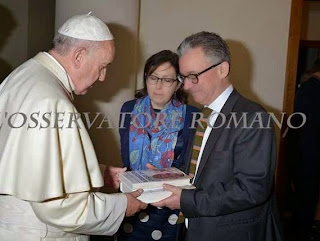 Pope Francis presents Austen Ivereigh with a copy of his book.

October. The World Synod of Bishops is held. To make sure that the "right" decisions are taken, Pope Francis asks Cardinal Kasper to write the relatio in advance. He then "accidentally" sends out invitations with the wrong venue to Cardinals Burke, Pell, and Müller, who find themselves stuck in Trent.

November. Pope Francis resigns, saying that he's had enough. Cormac Murphy-O'Connor takes charge of "Team Nichols", with the result that the Cardinal Archbishop of Westminster is the surprise choice for pope. This is astonishing, as nobody had suspected that he was even a Catholic. 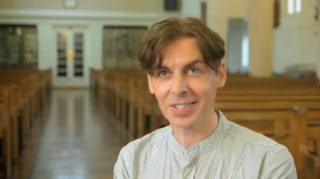 The Archbishop of Corby misses out again.

December. Pope Francis II (to give him his official title) invites Tina Beattie to lecture in the Vatican, and offers the Sistine Chapel as a base for the World Gay Catholic Society. The Tablet warmly approves this move.