We are pleased to welcome a celebrity guest blogger, the Archbishop of Corby, the Most Reverend Paul Priest, who will explain (more briefly than usual) why the Catholic Church in England and Wales owes so much to his friend Damian Thompson. 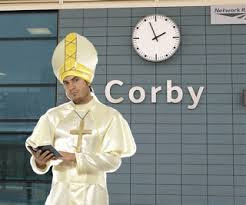 God, that man Damian is just so WONDERFUL. Remember when we were looking for a successor to Cormac as Archbishop of Westminster? Damian PERSONALLY spied on all the Magic Circle bishops and dug up all the dirt on them. For weeks he wrote hard-hitting articles pointing out that Arthur Roche was too fat, and Peter Smith smoked too many cigarettes. And in the end, the Nuncio got the message, and Vincent Nichols got the job. BLOODY MARVELLOUS, Damian!

The Pope's visit to Britain would never have happened if it were not for Damian. The organizer, Mgr Andrew Summersgill, had forgotten to make any room bookings, and the Papal Mass for the beatification of Cardinal Newman would have taken place in a bus shelter in Lincolnshire. But Damian came to the rescue, and in the end they used Cofton Park. AWESOME! 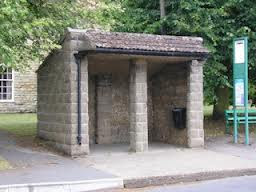 Cramped conditions for a papal mass to be attended by 55,000 people.

In fact Pope Benedict himself was going through a crisis of belief, and had to be rescued by Damian. To put it in layman's terms, the ontological neo-Kantian paradigm of Sacerdos Paulus semper obscurissimus est was giving him grief. I wrote to him myself: "Benedict, dude," I said, "just remember my encyclical Carpe vacuum, natura abhorret diem, and reflect on how Aquinas would have reacted." But, it took WONDERFUL Damian to tell the Pope the words he really wanted to hear, "Holy Father, I think your hair is fantastic." If it had not been for that, you can be sure that Benedict XVI would have resigned and we would now have Hans Küng as Pope. MAGNIFICENT, Damian! We LOVE you, dude! 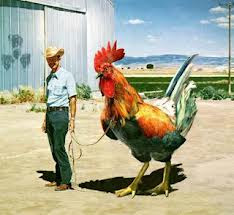 Richard Dawkins, with Charlie the chicken

An early photograph of the religious leader Richard Dawkins has just been published, which will be of great interest to Dawkists everywhere. It shows the brilliant man conducting research into the behaviour of chickens, a subject on which he was said to be a world authority. However, many modern scholars believe that the picture is a forgery, and they have even asserted that Dawkins was a purely mythical figure, whose life story was invented by his disciples. They point out that the writings attributed to Dawkins, being incoherent and inconsistent, are probably little more than clumsy forgeries put out by the Dawkist cult. 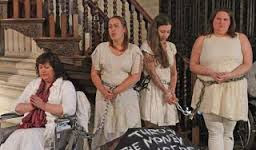 The first women bishops in the Church of England.

Meanwhile, the Church of England has finally taken a decisive step in gender equality, by ordaining its first female bishops. The four saintly women in our photo, Mothers Avaritia, Ira, Invidia and Superbia, are expected to bring a new style of worship with them, based less on God and more on getting their names in the papers. With this aim in mind, it is rumoured that they are already in contact with Giles Fraser, the producer of Thought for the Day.

A few weeks ago we advertised the Damian Thompson horror mask. Now, for the ladies, we have the Cristina Odone mask! Terrify your Catholic friends as they think you are about to unleash a stream of garbled nonsense in your role as a "Catholic spokesman." Scare off your children's boyfriends and girlfriends, as they fear they may be saddled with a mother-in-law whose head gives off steam when she tries to think! Dress up as the woman who, without any sense of irony, dared to criticise Britt Ekland for her looks! With Christmas fast approaching, it is also useful for prospective pantomime dames, ugly sisters, and wicked witches!