In the white corner, Brother Eccles, implementing the Eccles Bible Project. In the black corner, an atheist called Richard who is struggling to say say just one intelligent thing about religion. Today's topic: the first book of Samuel. I was going to do both together, but there's too much action.

Samuel - became a prophet at an early age.

Whereas most babies cry in the night and wake their parents, Samuel is himself woken in the night by God, and told to get prophesying. Actually, he does rather more than that, as he will soon become the last of the Judges, and when he's a bit older he leads the Israelites against the Philistines.

The Philistines have stolen the Ark of the Covenant, which is the most holy thing the Israelites have, and taken it to the Temple of Dagon, who may well have been a fish-god. A bad move, as Dagon's idol is first knocked down, and then vandalised. 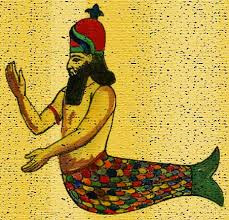 Dagon - we'll agree with Richard that this is not a god to be worshipped.

The Philistines start to suffer from "emerods" which is a nice word for a most disgusting condition (piles); we never did this bit at school, as all the boys would have sniggered.

To cut a long story short, the Israelites get their Ark back, and under Samuel's leadership stay faithful to God, and prosper. We're only in Chapter 8, and Samuel's task is almost done. He is getting old, and the Israelites have had enough of judges. They want a KING. 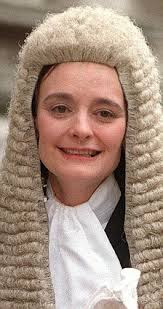 "Had enough of judges" is a popular sentiment, even in these days.

So we get to the story of Saul, who starts off as something of a goodie, and ends up as something of a baddie - and dead. We see him first looking for his father's asses (or donkeys, as Americans would have it). 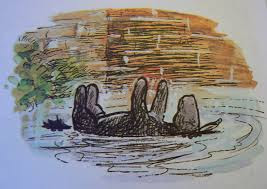 One of Saul's father's donkeys.

Being able to deal with asses is a great qualification for a monarch, even these days, and so Samuel anoints Saul as king. The Philistines are still causing a lot of trouble: nowadays "Philistines" tends to refer to those who hate culture, so it is no surprise that they don't get on with the man who now comes upon the scene - David, a skilled harpist. 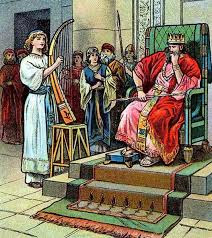 David, who is going to become a major figure in Jewish history, has another weapon, of course: a sling, with which he despatches the giant Goliath. After that, Saul becomes very jealous of David, especially as it becomes clearer that David is to succeed him as king. Saul wants to kill David, who goes into exile. 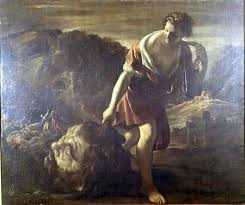 David wants to take flight, but there are questions over his hand-luggage.

However, Saul's son Jonathan is a great friend of David; also, in fact, his brother-in-law. At this point some silly people who have never had proper friends will tell you that it is something to do with homosexuality, but that theory doesn't make sense given all the other information we have.

The rest of the first book of Samuel contains a lot of the squabbling between Saul and David. Saul has definitely gone over to the dark side at this point, and Samuel makes a surprise comeback, when the Witch of Endor recalls him to warn Saul that there's trouble ahead.

So it all comes to a head at the end of 1 Samuel, when the Philistines defeat Saul and Jonathan in battle at Mount Gilboa, and they both die. Things have gone rather badly under King Saul. Will King David do any better? 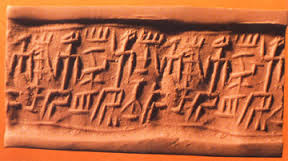 A Philistine inscription: "When I hear the word culture, I reach for my sword!"