As most readers will know, Pope Francis commanded Fra' Matthew Festing, deposed Grand Master of the Sovereign Order of Malta, to stay away from Rome during the election of a new Grand Master. This of course is a perfectly reasonable command, and not at all the action of a man who gets over-excited by absolute power. The reason given - inasmuch as the Pope actually gives explicit reasons, rather than hinting something to Ivereigh the odd-job man, who tells Fr Spadaro, who leaks it to the press - is that Fra' Matthew might try and influence the election - e.g., by winning it.

Other places that Festing is asked to avoid this month are:


and in addition he is forbidden to visit his Auntie Doris in Margate. Although the Pope does not have supreme authority over Rome (or Croydon/Corby/Malta/Margate etc.), this does not deter him from telling Catholics whether they may go there. 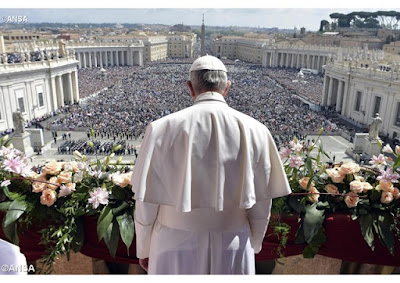 Where's Festing? If you spot Fra' Matthew, tell the Pope and you will be made a cardinal!

Thus, rumours are going round Rome that Fra' Matthew may be in Rome, but in disguise. One commentator has even suggested an invisibility cloak.

The search for Festing is complicated by the fact that thousands of his fans have descended on Rome, wearing red uniforms and claiming to be the man sought by the Pope. 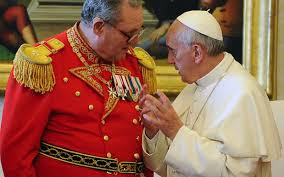 "Fooled you!" A Festing lookalike confesses to Pope Francis that he is really Spartacus.

Conspiracy theorists may also wish to take note that at the recent celebrations of Pope Benedict's 90th birthday, the main refreshment on offer was Boeselager (or in English, booze-lager), a drink named after Festing's former deputy. 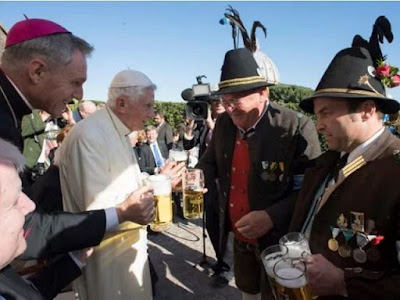 If you live in Rome, do remember to check your cupboards, under the bed, and your garden shed, just in case a persecuted ex-Grand Master is hiding there. And will mischievous people please stop telephoning the Vatican and saying "Hi, Matthew Festing here. I happen to be in town. Fancy doing lunch, Holy Father?" It is not funny.