The bishops get tough on forced abortion

Yes! Our England and Wales bishops have at last shown that they are prepared to take a moral lead! Faced with the case of an NHS trust which wishes to force an abortion on an adult Catholic woman with moderate learning difficulties (say, one step down from Diane Abbott), they did not hesitate to condemn the brutal decision by Mrs Justice (ha ha) Lieven in the strongest possible terms.

Well, they hesitated for three days. But I suppose yesterday was Sunday, and some of the bishops may have been attending church. 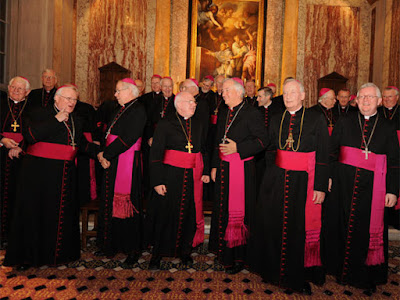 "On the one hand..." "On the other hand..." "There are two sides to every question." "Remind me, are we for or against massacres?" "We mustn't offend anyone, must we?" "When do we get the doughnuts?"

But finally, there came the statement we had all been waiting for:

By and large, all things considered, we think that forcing women to kill their kids may not always be the best solution. But we don't want to make an issue of it. Still, we think you ought to know that some of us are slightly disgruntled by the whole affair.

Apparently a few phrases were deleted from the original statement, because the bishops could not agree on them. These included:

Brood of vipers. Blood-crazed doctors. Murder. Bunch of psychos. Jackals. They're booked for the Lake of Fire - trust us, we know about these things.

But, on the whole, we think that the bishops' statement (which will be totally ignored, anyway) has really shown those fiends where they get off. Well done, my Lords!