Argus gets into trouble again

As readers will surely know by now, the religious blogger, Jesus of Nazareth, recently suffered a hatchet job from the malicious giant Argus Panoptes. 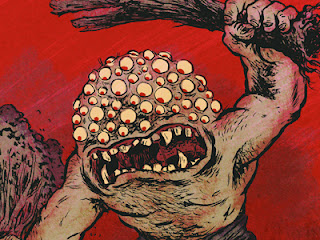 Argus Panoptes, the giant with 100 eyes, attacks his victim.

The story is that Argus sent a rather slow-witted creature, Bill the Lizard, to torment our Lord by misrepresenting everything He said.

For example, when Jesus raised Lazarus from the dead, it is known that Martha, the dead man's sister, had commented "Lord, by this time he stinketh, for he is now of four days." In the capable journalistic hands of Bill the Lizard, this became "Jesus told me that he really hated raising people from the dead, because they were so smelly." 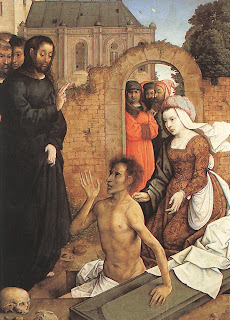 At least I don't smell as bad as certain journalists.

On another occasion, Jesus is reported as having written on His blog: For the poor you have always with you: and whensoever you will, you may do them good: but Me you have not always. Argus's tame lizard rendered this as "Jesus told me that he had no time for the poor, and always told his disciples to kick them out into the street." 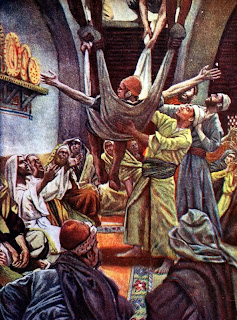 "... and it's really irritating to have sick people let down through the roof when I'm talking."

Fortunately, many bloggers have rushed to the defence of Jesus, including St Timothy the hermeneutic, St Timothy of Stanley, St Laurence of England, and even the eccentric St Z (and many others too numerous to name individually).

Finally, even Bishop Kieran has taken notice of these events, and given support in the way he knows best. "I must apologise for any offence given by Jesus Christ," he said. "Sometimes in his enthusiasm for religion he goes too far. Be reassured that there will be very few Catholic priests in my diocese who act like Jesus - at least not if I have anything to say in the matter!"

Bill the Lizard was unavailable for comment: it was believed that he had been been engaged in an errand of mercy, rescuing a child called Alice who had become trapped in a house. Unfortunately, she kicked him up the chimney when she knew who he was.

Bill the Lizard finds that charitable acts aren't as easy as they seem.