Catholics worldwide have been stunned by the news that the Tradi-ban is now occupying Rome, led by the triumvirate of Bar-Golio, Pah-Rolin, and Ahfah-Roche. Last night Rome was full of Tradi-Ban troops singing the victory anthem "Trads Cussed". Sadly, nobody suspected that when President Bidenict XVI withdrew his forces in 2013, the brutal forces of Tradi-ban would soon be able to take over and occupy the eternal city and from there rule the entire land of Catholistan. 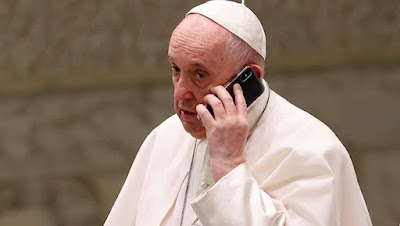 "Someone's singing Salve Regina! Send in the elite Swiss Guard commandos." With the Tradi-ban in power, there will be many new restrictions on the rights of Catholics - and in particular, they will be deprived of freedom of worship. Women will be told how to dress: mantillas and long dresses are out, and they will be forced to wear the soulless uniform dictated by Bar-Goglio, namely, bergos (crop tops and yoga pants). President Bidenict has so far not commented on the Tradi-ban coup, and at his advanced age he now spends most of his time sleeping and eating ice-cream. However, there has been criticism worldwide of his hasty withdrawal, which left many Catholics in danger of persecution. 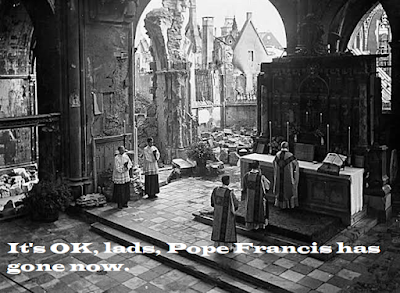 The Tradi-ban's forces fail to destroy a strategic target. All is not lost, however. Political commentators such as Max Beans, Lamb Chop, and Tom Risible have welcomed the Tradi-ban as finally bringing Catholistan kicking and screaming into the 1970s. And we know how seriously people take their views.
Posted by Eccles at 11:07