Comedy award for Martin and Ive

The popular comedy duo, Martin and Ive, has just swept the board in the prestigious Francis Awards, defeating Cardinal Becciu's solo routine ("I would have been pope if only the press hadn't kept telling the truth about me"). So it seems only fair to share some of their finest jokes with our readers. 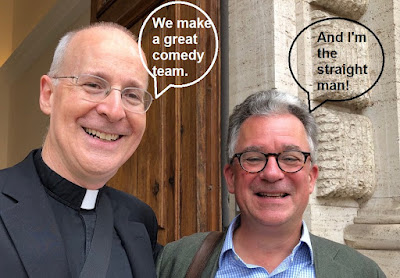 As with Morecambe and Wise, one of the duo has short fat hairy legs. Let's start with Jimbo's comments on the Holy Spirit.

Great gag, Jim! You see, unlike Vatican II, which was only inspired by the Holy Spirit, this new Vatican III is managed by the Holy Spirit. Take note, it wasn't Pope Francis waking up with a hangover one day and saying "How can I best undermine traditional Catholic teaching? I know - get a lot of heretics to write in, together with moaning Minnies with grudges, and turn the lot into an Even Newer Testament, saying it was inspired by the Holy Spirit." No, the Trinity in His Wisdom decided that the time had come to throw away 2000 years of teaching and start again!

Ivereigh explains blasphemy. Yes, for 2000 years the disciples, saints, popes, doctors of the Church, etc. have been committing blasphemy. Simple doctrine like "No murder", "No adultery" and "No theft" can't be regarded as set in stone. Especially not adultery, which became "OK" again after Amoris Laetitia. Note the way that the great comic Austen turns round Catholicism in order to parody it. In the old days it was blasphemy to subvert Catholic teaching, but now - ho ho - it is blasphemy to insist on it. One more joke from Ivereigh to finish off? Yes, why not? 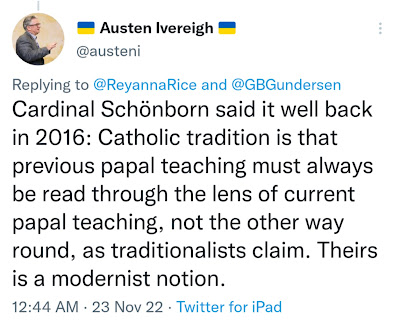 A new reversal of Catholic teaching. The recipe is the same here, but still effective. It is modernism to reject modernism - have I got that right? What popes said in the past has to be interpreted using the totally contradictory wibbling of the present incumbent. But we must remember that Austen is an Oxford don - at Camp Hall (memo: check name), and this is what we call Oxford humour, and like "alternative" comedy, is not usually funny. I've got it - contra-Chestertonian, that's what these guys are. GKC was a master of paradox, saying things that seemed absurd but turned out to have wisdom in them. Jim and Austen go in the opposite direction. Anyway, congratulations on your "Francis" award, team! 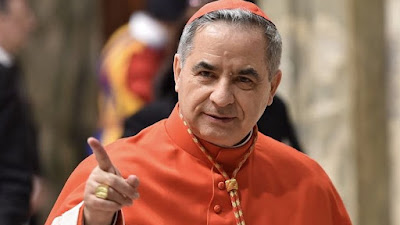