From Saturday's Daily Telegraph, or possibly not.

As most people will know by now, Damian Thompson is leaving the Daily Telegraph after an entirely amicable beating up by "self-content officer", "editor-in-chief" and "supreme commander", Jason Seiken. This blog has been given exclusive rights to the Dame's last Telegraph column, the one that was never actually printed. 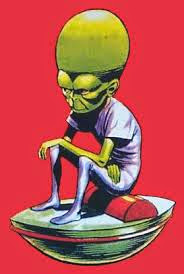 Jason Seiken - he wants you to consume great content. Or something.

Just what is happening at the Telegraph? Mekon lookalike Jason Seiken has sacked nearly all the staff and from now is going to write the entire newspaper himself. However, all is not lost: reports are coming in that my friend Brainy Gordon is still on board. Brainy is known for her tasteful memoir The wrong knickers; some have compared her descriptions of the angst felt by young ladies seeking men to Jane Austen at her best ("Fie, Mr Bingley! You have sent me the bloomers of Lady Catherine de Bourgh by mistake!"). Brainy is said to be working on a sequel, to be called The wrong bra, or My cup runneth over. My spies tell me that she is in line to become the new business editor of the Telegraph. 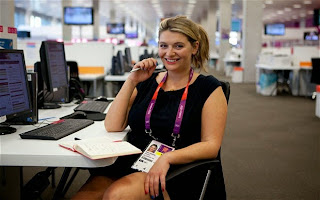 Professor Gordon. The badge reminds her how to spell her own name.

I myself am moving on to pastures new. After giving the best years of my life to the Telegraph and recruiting such star bloggers as James Delingpole, David Lindsay, Martin Salter, Gerald Warner, and George Pitcher, I have decided to take my talents elsewhere. Of course I do have my regular column at the Spectator, in which I introduce readers to composers they may never have heard of before, such as the "three Bs" - Bach, Beethoven and Mozart - but this hardly pays enough to keep me in CDs.

So I am currently weighing up various offers: the Australian Pottymouth Gazette, incorporating Rolf Harris's Kangaroo-tying Weekly, is looking for a new correspondent specialising in Catholicism, cupcakes and custard, and I may be in with a chance there. Alternatively, my old friend Cardinal Vincent Nichols has been getting a bad press lately - mostly from me - so I am thinking of offering my services as his new press officer.

Of course, since he suppressed the Protect the Pope blog, Bishop Campbell has also started feeling unwanted. I have written to him, offering to revive the PtP blog, leavening its usual heretic-smiting with a few witty anecdotes about Gladys Mills and Noele Gordon (mother of my friend Brainy!) We'll see if he bites! 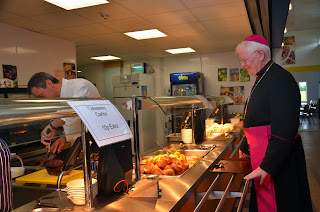 Bishop Campbell asks for an extra helping of custard.

One of the great things about my blog is the number of daughter blogs that it has inspired. I regularly read Mundabor's blog, although I don't really understand his references to Pope Quisling and the Sodo-Nazis - I think they must be some sort of rock group. 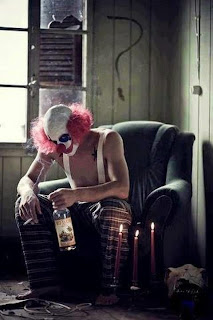 I even read Bosco's blog!

Then there are Catholicism Pure and Simple, Eccles is Saved, All along the watchtower, the donkey man, etc. Of course my favourite blog of all is On the Side of the Angels, written by my great friend the Archbishop of Corby. 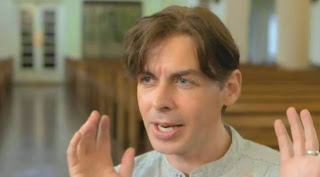 Dude, aren't you homologising the contradictorily monolithic contextualisms of mimetic space, by disregarding the tensely granulated actualities of logocentric wholeness?

So, what else is happening at the Telegraph? There's still a strong religious presence, both from the slightly silly wing of the Catholic Church (Tim Stanley) and the Monster Raving Pelosi church (Cristina Odone); Geoffrey Lean (aged 107) is there to warn us of the dangers of a new technology called the "horseless carriage"; and Dan Hodges is ready to give his expert opinion on the World Cup (apparently England are hot favourites), UKIP (not likely to get any MEPs), and Ed Miliband (a man of impeccable table manners).

Although I am sorry to let my blogging sheep wander unattended, I have every confidence that they will continue to generate click-bait by writing controversial articles, such as "Do Muslims cause climate change, or should we be blaming Steve Gerrard?"

So, farewell to all the readers of my blog, most of whom were banned long ago by my zealous team of Sri Lankan "muddlerators" (thanks, Eccles!) as soon as they said anything intelligent. I'm not generally in favour of euthanasia, but I've arranged for the last remaining trolls - mainly mollusc-molesters, Dawkinsites, incognito deacons, Fabian teenage girls, and of course a coach-load of "Phil" sockpuppets - to be sent to the Lord Falconer Death Camp, as they clearly cannot live without me. Byeee! 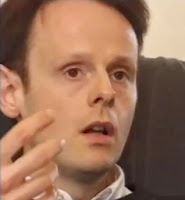