Saint of the week - St Nicholas

Here's a little exercise for you. Can you identify the saints in this photo?

Obviously readers of this blog will have no trouble here, although most non-religious members of the general public will probably only identify the chap on the right. The lady on the left is of course St Mary, and she may even appear in a few remaining nativity plays, although, out of deference to the sensibilities of Muslims, atheists, etc. she is nowadays only allowed to hold a teddy-bear rather than the baby Jesus.

The chap in the middle? There's a clue in the keys, isn't there? Unlikely to be St Zita of Lucca, the patron saint of lost keys, as she was definitely female. Although in these days of gender-flexibility, who knows? Anyway, the answer of course is St Peter, the rock on whom the Church is said to be founded.

Which leaves number three, St Nicholas, also known as Santa Claus or even Father Christmas. Everyone knows him. People are even paid to impersonate him and sit in "Santa's Grotto" giving out toys around this time of year.

St Nicholas (15th March 270 – 6th December 343) was bishop of Myra. He is known for going "Ho! Ho! Ho!" and keeping company with elves who made toys. This is unusual for bishops, although there is perhaps an obvious exception (instead of elves, he has the St Patrick's Day Parade). 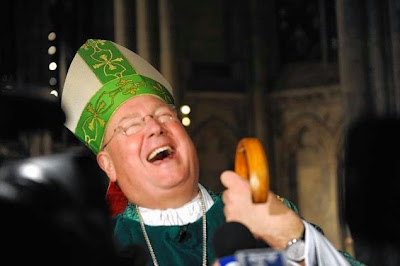 It is difficult to find many other bon mots attributable to the bishop of Myra. Some say that he used to ask people "Have you been naughty or nice this year?" - a function now partly taken by Cardinal Müller of the Inquisition. Another wise saying attributable to St Nicholas is "Come and sit on my knee, little girl, and tell me what you'd like for Christmas" - there is currently no bishop with this specific responsibility, as far as we could tell.

Myra is in Turkey, a rather warm place to find reindeer, and so the legend that its bishop used to drive around in a reindeer-drawn sleigh with jingling bells is disputed by scholars. One may expect to hear a certain hymn on Songs of Praise, which, in its original plainsong version, went something like this:

Let the bells jingle, for is it not pleasing to ride in an open sleigh that is drawn by a single horse? 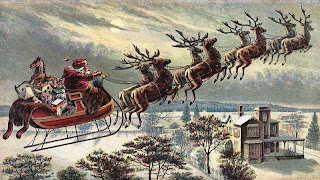 All in a night's work for your bishop.

Thus it is possible that the bishop's "one horse" has been exaggerated into "eight reindeer", possibly including a ninth with a red nose. A historian's lot is not a happy one.

Well, that's all you really need to know, except that St Nicholas is remembered for various miracles - the one in which he squeezed himself down all the chimneys in Myra in a single night in order to leave gifts is perhaps the most famous, although there are others, such as the one about resurrecting three dead-and-pickled boys, which is a bit too gruesome for a blog like this.

Anyway, St Nicholas is appreciated by Christians and atheists alike, and that must be something of a miracle. 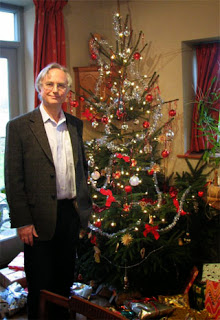 "I'm staying up all night in the hope of seeing Santa Claus."