Theologians, canon lawyers, professors, journalists, Jesuits, and Catholics worldwide are currently trying to get to grips with Pope Francis's latest claim that he is the Devil. Should this be interpreted as an infallible statement? Or at least part of the Catholic Magisterium? Well, if not, does it have the "ex aeroplane" authority of an in-flight declaration? Or maybe it's just a load of Scalfaris, and never happened at all?

You see the problem. If some of the Pope's statements are deemed to be jokes, how are we to tell which they are? Is Amoris Laetitia just one big joke? Or is it just the footnotes? Will it be necessary for Cardinal Burke to issue another Dubium along the lines of: "Are you really the Devil, Holy Father?" Was the appointment of Cardinal Cupich ("the world's nastiest cardinal") a joke that was accidentally taken seriously? 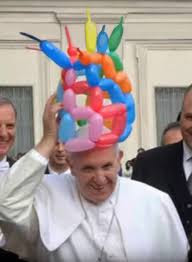 "From now on, if I'm wearing the balloon hat, I'm joking, otherwise I'm being Magisterial."

Fortunately, Catholics are asked to respect the views of the Pope, but do not need to agree with them unless they bear the authority of the Magisterium. Unlike many of the Pope's utterances, the "I am the Devil" claim does not contradict the teachings of previous Popes: on the other hand, Catholics are still not obliged to believe this new doctrine.

So, please let us have no more queues of people at Confession saying "Father, the Pope says he's the Devil, but I cannot believe this teaching. I think he's just a very naughty pope." 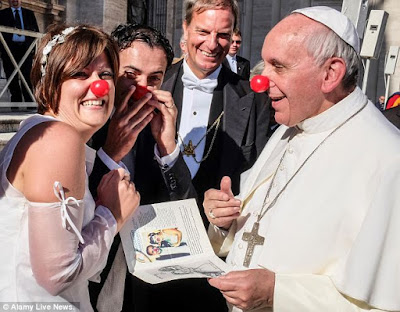 A red nose indicates a Magisterial statement where the "infallibility" button has not been pushed.

We are looking forward to hearing jokes from Pope Francis along the lines of "A cardinal, a bishop and a seminarian went into a bar." If the papal balloon-hat is not being worn, this means that the event actually happened (and Archbishop Viganò has all the details).