Critics of the superstar sportsman, His Serene Highness Pope Francis the First and Last, have been accused of racism and sexism, after they objected to the way he screamed at the judges in his latest tournament.

Serener Francis apparently indulged in one of his famous meltdowns, accusing his judges of being LITERALLY SATAN. "How dare you criticise me and my bishops?" he asked, throwing his zucchetto on the floor and stamping on it. "You cannot be serious. Only the Great Accuser would wish for our bishops to be brought to book for their misdeeds!" 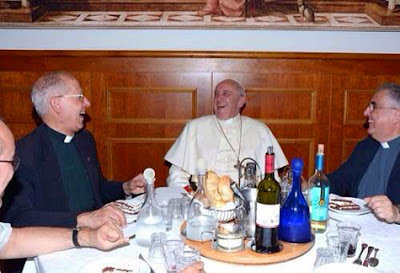 Serener Francis has a humble (liquid) dinner with some despised members of society.

Tennis commentators such as Massie "the Prof" Faggioli, Aussie "clueless" Ivereigh and Tommy "Blocker" Rosica were quick to rush to the support of the serene superstar, winner of the St Gallen all-comers championship in 2013.

"Obviously it's racism, as he comes from the Southern Hemisphere," said one.

"People want to replace him by a white male, like, er, Cardinal Sarah," said another.

"Serene Francis is just what the Church needs - see my book Serener Francis - The Great Screamer, only 20p from any charity shop" said a third.

Although he has won many tournaments, Serener Francis has not always had things his own way. In the Dubia tournament of 2016 he dropped five match points to Ray Burke, the American seed, and has never forgiven him for this.

However, on the whole, Serener Francis has been greatly praised for his humble attitude to life - unlike Ray Burke, who served luxury profiteroles at his birthday party (£1.50 for 12), the Serene Pontiff chose to celebrate by inviting a humble group of homeless people, journalists, cameramen, and yes-men to eat a plate of Grande Scandalo Italian pasta in front of the cameras. 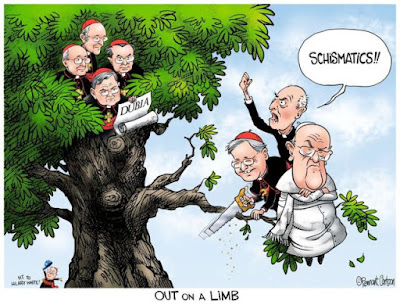 As for whether Serener Francis will be disciplined for his latest outburst, it seems unlikely. If all else fails he can declare infallibly that nothing his bishops have done is contrary to Catholic teaching. In which case we are in deep trouble.