Cardinal Wilfrid Fox Napier OFM was once a reasonably orthodox Catholic, but his history may be regarded as the Rake's Progress in 3 parts. 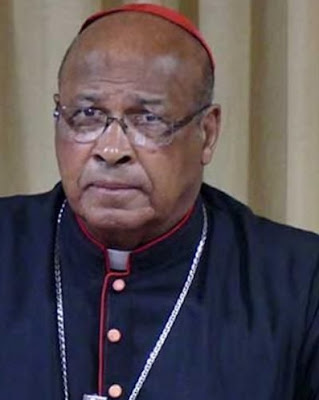 Warning - this is going to end badly.

Part I - the Smiter of Heresy. 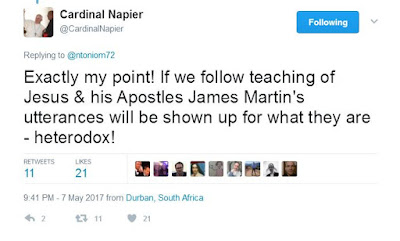 Clearly this is a man who will stand no nonsense. Indeed, in the 2015 Synod on the Family, he expressed disquiet at the way it was being gerrymandered. Now he's stomping on Fr James Martin LGBTSJ, who deserves stomping on if anyone does. What can possibly go wrong?

Our hero descends into a slavish adoration of Pope Francis and his dreadful Amoris Laetita (the Pope's little joke on the Church). I can't pinpoint any wonders achieved by Pope Francis, but I am sure that if we get a Pope Francis II (say, Cupich, Wuerl, or Tobin), then lots of dodgy miracles will be attributed to Francis I, and he'll be canonized before you can say "McCarrick!"

Part III - a place is reserved in Bedlam. 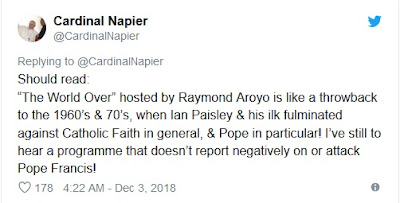 The final descent into madness.

Right, that's clear. Anyone who criticises Pope Francis is literally Hitler Ian Paisley, the loud-mouthed Protestant politician from Northern Ireland who shouted "Anti-Christ!" at Pope John-Paul II. Poor old Ian was actually very sound on issues like abortion and homosexuality, but he really didn't like Catholics. Now, it's hard to know whether Raymond Arroyo has shouted "Anti-Christ!" at Pope Francis. It's said that a lot of people mutter that phrase under their breath whenever the Holy Father goes on the rampage. Burke, Festing, Sarah, Sire, ...?

But poor old Arroyo is one of the mildest of chaps.

Oh dear, this is most embarrassing. Not only did Cardinal Napier lose out badly to Raymond Arroyo in a Twitter poll, but he even lost out to Ian Paisley. I'm sorry, Wilf, I'm so very very sorry... 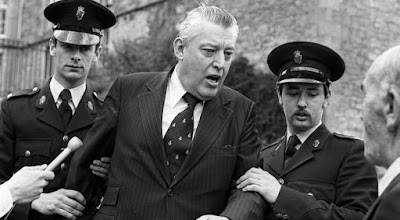 "And that Amoris Laetitia is rubbish as well!"