With apologies to W.C. Sellar and R.J. Yeatman.

In 2013 Pope Benedict surprised everyone by resigning as pope and forgetting to die. Thus he was still allowed to wear his white coat, and did not have to be put in a tomb. The cardigans gave him the job of Emergency Pope, and met to choose a successor. 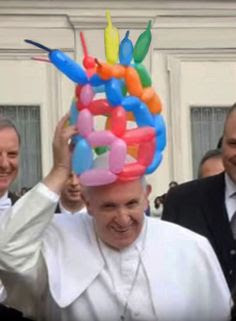 Having had a saintly pope (John-Paul II) and a learned pope (Benedict), the cardigans decided try something completely different and choose their pope from Argentina, a man known as General Belgrano. He was strongly supported by the St Gay Mafia, which included Cardigan Dandruff, Cardigan Casper the unfriendly ghost, and Cardigan Comic Mercy-O'Conman.

General Belgrano was known to be a humble man, and indeed his papal motto was NON ESTIS HUMILES, EGO SOLUS HUMILIS, which means "You are not humble, only I am humble." He chose the name Francis in honour of Francis Ford Coppola, the producer of the Holy Father films. 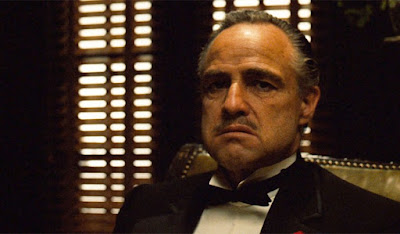 One of the first actions of the new pope was to attack the Franciscan Friars of the Immaculate, who had been behaving too immaculately. Fr Fidelio Volpone was appointed to help them become less immaculate, so he helped them by dismantling the order. When he had done as much damage as possible, Fr Volpone decided that he had achieved his life's ambition, and died.

In the second year of his humble reign, Pope Francis held the first of two Sinners of the Family, which were meetings of bishops who wanted to try out new sins. A very powerful cardigan called Baldacchino was appointed to run these Sinners, and to tell the bishops which new sins they would be encouraged to commit.

Being a humble pope, Francis then decided that it was time to give an equal opportunity of humility to Cardigan Burke: it is said that he was jealous of him because he was an intelligent man who had read the Bible. Cardigan Burke had been a member of the Congratulation for Bishops, which chooses new bishops, but this was too important a post for a humble man, so the Pope told him to look after the Order of Malta instead. As we shall see, this was all part of a devious plan to cause more humiliation for Burke, although this took two more years. 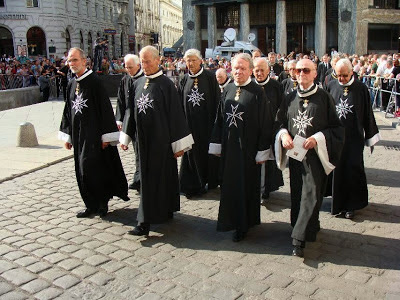 How do you make a Maltese cross? A problem that Pope Francis solved two years later.

Finally, at about this time Francis realised that he had been elected to sort out the problems of the Roman Curious, who were the people who did all the hard work in the Catholic Church. Being a humble pope he identified fifteen disorders from which they suffered, including Spiritual Alzheimer's, Numinous Measles, amd Gnostic Arthritis. However, apart from insulting them as part of his Christmas greetings, he took no further action at that time.

In the next part we meet Loudhailer Si', the 2nd Sinner of the Family, and the Year of Murky. 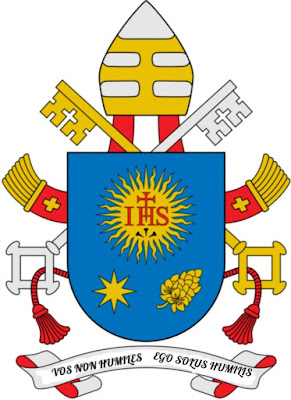 The arms of a humble pope.

Email ThisBlogThis!Share to TwitterShare to FacebookShare to Pinterest
Labels: 1066 and all that, 2013 and all that, Cardinal Burke, coat of arms, curia, Fr Fidenzio Volpi, Franciscan Friars of the Immaculate, Malta, Marlon Brando, Pope Benedict XVI, Pope Francis, synod, The Godfather