In the third year of his reign, Pope Francis the Humble produced a papal encyclopedia, called Laudato Si'. Since they did not speak Italian, most people thought that this was a new type of pasta, and were very disappointed when it turned out to be something totally indigestible. 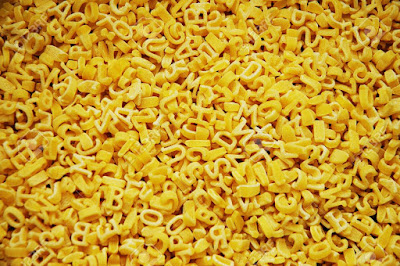 Re-arrange these letters into something spiritually nourishing.

Laudato Si' was all about the environment, and the Pope humbly explained that flying in aeroplanes and giving press conferences was bad for Mother Earth; indeed, every time a journalist asked a question, a polar bear burst into flames. Also, he explained that biodiversity was more important than anything else, even religion. This led to a great increase in the number of pandas, blue whales, and Sumatran tigers adopted by Catholics. 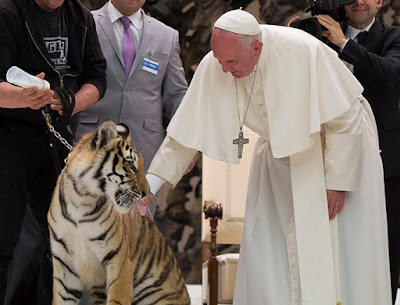 It was also time for the second Sinner of the Family, so that lots of bishops could come to Rome and see which sins they most enjoyed. The bishops voted for their favourite sins, and in the end Cardigan Baldacchino told them they had got it all wrong, and that Pope Francis would have to write a humble Apostolic Expiration called Amorous Letitia, to tell them what they should have said.

Meanwhile, Pope Francis, being a merciful as well as a humble pope, decided that the Church should have a Year of Mercy. This was to be the first of a series of years celebrating the things Pope Francis held sacred, and future ones would be called the Year of Pizza, Year of Football, and Year of Tango. 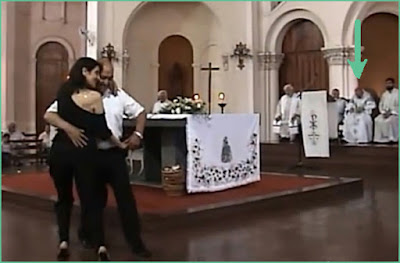 Auditions for the Year of Tango.

In the Year of Mercy, all churches had to have a door called the Door of Mercy for people to enter by if they were feeling merciful. Those who did not feel merciful were allowed to enter by the Window of Cruelty instead.

Pope Francis's reign was known for the custom of using silly logos for all events, because all the sensible logos had already been used. One of his advisers said "Let's use a logo of a two-headed Cyclops on skis - we haven't had that one before, have we?" After checking the records of all Catholic logos used, all the way back to the 1st Century, it was confirmed that nobody had thought of that logo before, not even St John when he wrote his Logos Doctrine. So the logo was adopted, and the Catholic faithful were briefly united in crying for mercy whenever they saw it.

In the next part, we meet Amorous Letitia; also Burke is Dubious, and Fra' Matthew stops Feasting.

Email ThisBlogThis!Share to TwitterShare to FacebookShare to Pinterest
Labels: 1066 and all that, 2013 and all that, Amoris Laetitia, General Synod, Jubilee Year of Mercy, Laudato Si, logo, pasta, Pope Francis, tango