A successful week for Pope Francis

As Pope Francis keeps telling us, he is an old man, and starting to slow down. He hasn't slapped a pilgrim for several weeks, nor personally insulted a cardinal for a month or two. So it is with great pleasure that we can list some of the achievements of his recent trip to Canada. 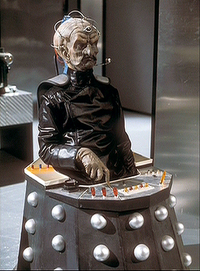 Confined to a wheelchair but still in control! 1. Idolatory. Pachamama is so 2019, and a go-ahead pope who wants to troll the Catholic Church has got to find a new object of pagan worship. So we are delighted to welcome the Western grandmother, invoked in a "smudging ritual", in which noxious smoke is wafted round the room. Whether she will catch on with Francis-Catholics (now mainly Ivereigh, Lamb, Faggioli and Spadaro) is unclear, but here's Granny! 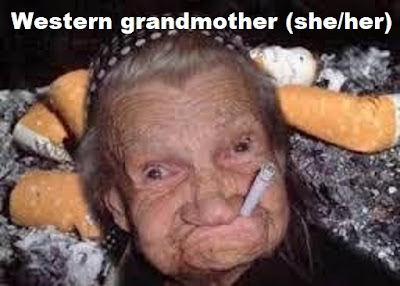 2. Fake confessions. Who are we to judge, but it may be thought that most Catholics - even the pope - have enough sins of their own to confess without confessing other people's. But no, in a brilliant innovation, Pope Francis has apologised to the Canadians, expressing deep shame and sorrow for various abuses that may or may not have taken place. Well, it certainly stopped anyone from asking embarrassing questions about Gussie Zanchetta! 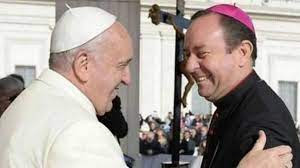 "Don't worry, Gus, some future pope can apologise for us!" 3. A ritual kick at traditional Catholics. They just won't go away, will they, Francis? That TRADGON deodorant that Arthur Roche bought you doesn't seem to be working. A few bishops share your vindictive attitude to people who are used to the older forms of worship, but most are still ignoring you and hoping that the men in white coats will soon cart you off to the loony bin. Meanwhile, however, carry on insulting! Today's new one is BACKWARDIST. A good one, eh? When your popemobile is rushing down the hill towards a chasm, it's the backwardist who tries to stop it. Austen Ivereigh thinks it's brilliant! 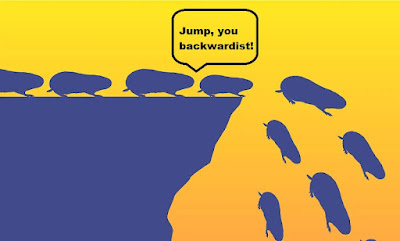 4. Evolution of doctrine. As Pope Francis keeps stressing, doctrine evolves. What was a sin in the 1960s (or even the 1st century) may no longer be a sin! Conversely, there are new sins, such as advertising a Latin Mass in your parish bulletin, which earlier popes would have thought hilarious. Watch out, Humanae Vitae, we're gunning for you! 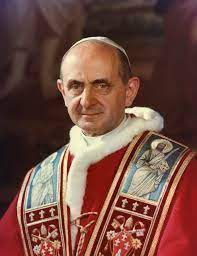 A nasty rigid backwardist pope! Which idiot canonized him? Oh...
Posted by Eccles at 16:30