The University of Notre Dame, Indiana, has announced the winner of its 2016 Laetare medal, which is awarded in recognition of outstanding service to the Catholic Church and society. The lucky recipient is Mr Kim Jong-Un, 17, a North Korean politician, whose record of murder, imprisonment and torture is "just what we're looking for", in the words of a spokesman for the college. 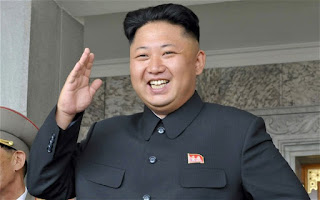 "I am honoured to receive this medal," says Mr Kim.

"At first we thought of giving the medal to Vice-President Joe Biden," said the spokesman, "after he wrote to us telling us what a great Catholic he was. However, further investigation revealed that he was a supporter of abortion and same-sex marriage, and our strong Catholic principles obviously forced us to rule him out. If we'd honoured him we would have become a laughing stock. Our reputation still hasn't recovered from the time when we gave an honorary degree to Barack Obama - if we'd vetted him properly we might have noticed that Obama was an advocate of dismembering small children, which some of us feel squeamish about." 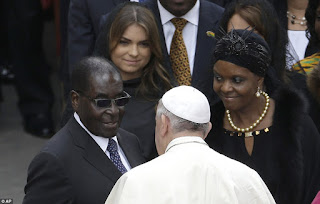 Robert Mugabe (L) is not amused.

Mr Robert Mugabe, 112, of Zimbabwe (or, as Oxford students now wish it to be known, Southern Rhodesia) was not amused at narrowly missing out on the prestigious medal. "I have a great respect for what Mr Kim has achieved," he said, "but I should point out that, unlike him, I am actually a Catholic. Pope Francis has refused to condemn me, so I must be a pretty good guy. I don't know who this Laetare chap was, but he must be turning in his grave." The Notre Dame spokesman admitted that Mugabe was a "better fit" to the Catholic ethos of the college, but said "Well, there's always next year!"

What is a tragedy as far as Notre Dame is concerned is the fact that it never honoured Ted Kennedy, the politician and underwater racing driver. Medals were awarded to his brother JFK and sister Eunice, but somehow young Edward missed out on his due recognition as "the sort of Catholic that Notre Dame appreciates". Well, it's too late now. 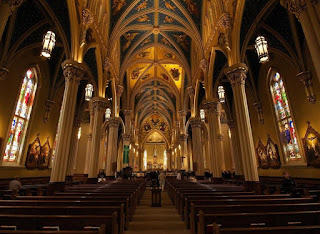 Spiritual nourishment to help you recover (Notre Dame's Basilica of the Sacred Heart).