No halo for G.K. Chesterton

The Madness of Peter Doyle, by Saint G.K. Chesterton.

Father Brown always used to say that the strangest case he ever came across was that involving the unaccountable behaviour of a Catholic bishop called Doyle. He encountered that eccentric cleric on a visit to Northampton, an obscure midland town which had mysteriously been designated the seat of a Catholic bishop. Equally mysteriously, Pope Benedict had chosen one Peter Doyle as its bishop, having watched a documentary called "Father Ted", and somehow having been led to believe that young Peter was the son of the devout Mrs Doyle. 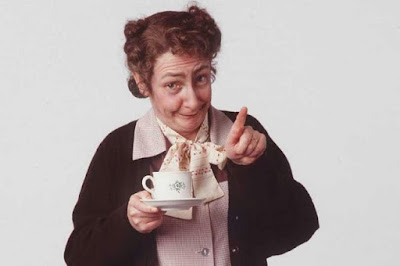 Thus, Father Brown was strolling through the streets of Northampton when his attention was attracted by cries of "We want Gilbert!" and "Down with Doyle!" A large crowd had gathered outside the bishop's house, and Father Brown entered, to observe an elderly cleric jumping up and down on the photograph of a large jovial man and screaming "WE HATES CHESTERTON! WE HATES HIM! WE HATES HIM!"

"I think, sir," said Father Brown, "that I would like to hear why you hate Mr Chesterton. Many people have spoken out in favour of his canonization, which is considered less controversial than those of Oscar Romero and Pope Whose-turn-is-it-this-week of Vatican II."

Bishop Doyle is happier speaking with James Martin at conferences on LGBT issues.

"First, there is no local cult," said the bishop, gulping down a handful of REES-MOGADON tablets ("guaranteed to bring total calm").

"Not even in Beaconsfield, where one can find the grave of Chesterton, which attracts pilgrims on a regular basis?" asked Father Brown. "Just seventy miles from here."

Evidently Bishop Doyle had not heard of Beaconsfield, for he continued his enumeration of the apparent defects in the character of Mr Chesterton. 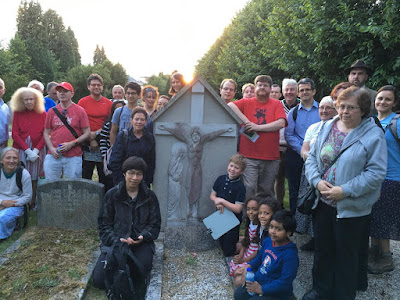 Definitely not a pilgrimage. Just a chance meeting at GKC's grave.

"There is no pattern of personal spirituality," continued the bishop.

Father Brown choked slightly, thinking of "Orthodoxy", "The Everlasting Man", "Heretics", "Eugenics and other evils," "St Francis of Assisi", "St Thomas Aquinas", and numerous other writings of spiritual nourishment, as well as G.K.C.'s more personal proselyting on behalf of the Church.

"You are going to play the anti-semitism card next, are you not?" he said. "The man who was condemning the Nazi persecution of Jews as early as 1934. The friend of Weizmann. The encourager of Zionism."

The bishop stared at Father Brown in dismay, as if he might be regretting the huge blunder that he had made.

"I am a priest, Bishop Doyle," said Brown, "and I am ready to hear your confession." 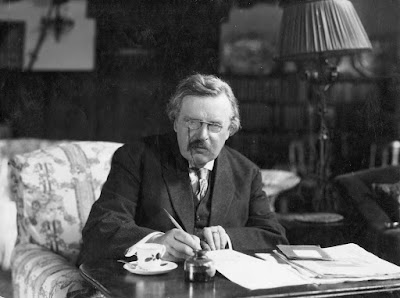 The actual photo upon which the famous jump of Bishop Doyle took place.

As Father Brown freely admitted later, this was not one of his most successful cases.