"Hi! I'm Justin, Archbishop of Canterbury, and the rightful heir of St Peter (we try not to mention Henry VIII). I've been asked my opinion about buffer zones!

Well, at first I misunderstood. I thought they were referring to zones where old buffers like me could sit and relax, untroubled by my neighbours praying! In the Anglican Church we call them cathedrals, and they usually have a crazy golf course or helter-skelter to help bring in the customers!

But, no, it actually refers to buffer zones round abortion clinics. My dear friend Juq the Ruppa (memo: check name) is a great fan of these, especially in Ealing, and she certainly doesn't want to see people praying!" 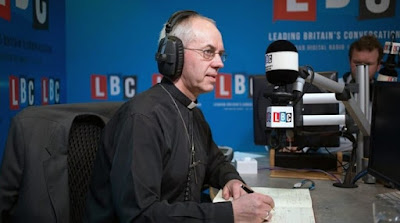 Political leaders welcomed Welby's views. "You wouldn't think he was one of those God-botherers, would you?" said a prominent Labour MP, K. Herod. His own party has decided to decriminalise all abortions, and is now looking seriously at allowing the possibility of killing all children up to the age of 6, after which they will of course have the vote.

"No, he's very enlightened," agreed E. Nero, a Liberal Democrat MP. "Welby's the sort of sound man that would be welcome in our party, unlike those Christians we chucked out." His party is looking into the possibility of making pregnancy illegal, and - being liberal - only killing children up to the age of 4.

These views of Archbishop Welby may lead to an ecumenical crisis, as Catholics (even Vincent Nichols) are unlikely to participate in ceremonies to bless abortion clinics. However, when did you last hear a Catholic priest - far less, a bishop - denounce abortion from the pulpit? As St Stephen put it: "Hey, guys, I was only joking when I said I believed in Christ. Put those stones down!" 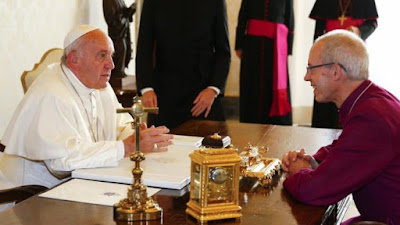 Francis: We've dropped the adultery and idolatry commandments. That's as far as we can go now.
Welby: Hold my beer!