Cradinal Marc Oullet is dellighted to know that Eccles has adopted him.

I was told about a luvvly website called Adopt a Cradinal, which allows people to adopt a cradinal wot dey can support durin de next few weeks while dey is ellecting a new Pop.

De website randomly gave me Cradinal Oullet, wot is Canadian, and seems to be quite a saved pusson on the whole. De Paddy Power bettin site has got him in 4th place at 8/1 odds. Above him dere is Angelo Scola, Peter Turkson and Tarcisio Bertone, but my freind Damain Thopmson says dat one of dem has got bad hair, annuver has got a weight problem, and de third is addicted to cupcakes. So probabbly Cradinal Oullet is gonna win. 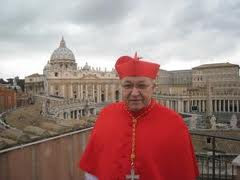 Well, I has been doin what I can to help Cradinal Oullet. I has been sendin him food parcels, and I telephones him several times a day to see whevver he has any little jobs wot want doin. De last time I telephoned him at 4 a.m. to say "Ullo, Cradinal, I is coming to Rome soon. Is dere anyfink I can do for you when I get dere?"

Cradinal Oullet replied "Just go and jump in the Tiber you pest," which sounds like creul words to me, but I am sure dat if a Cradinal tells you to do it, he gotta have a good reason. My freind Damain says dat Cradinal Cormac often used to tell him to tie weights to his ankles and jump in de Thames: however, he never did it. 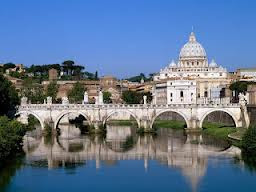 Gonna be jumpin from here, probabbly.

Well, dat's all I got time for right now, but I shall say a prayer for Cradinal Oullet, dat he gets de top job, or, if he doesn't, dat he votes for me.

Now, where can I get swimmin lessons?