December 11th 2021. After the 2020 fiasco, in which their Christmas Nativity Scene featured Fisher-Price toys, a spaceman, and a statue of Moloch, the Vatican has produced what Pope Francis has described as a "traditional crèche" for its 2021 offering. 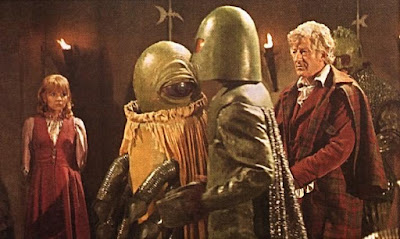 Nobody could be offended by this one! Said a spokesman, "Our sculptor has been influenced by 1970s British television in his design. Although there are also influences from ancient Peladon." He went on to explain that the young lady on the left was clearly the Virgin Mary, and actually a resembled a human being rather than the 2020 rag doll. The older man on the right was Joseph, and also designed to resemble a real human being. The one-eyed egg was not of course supposed to be Our Lord (who is missing entirely to avoid offending non-Christians), but was almost certainly an angel. The two warriors were in fact shepherds, as it was a well-known fact that first century shepherds always wore armour to protect their sheep against wolves (cf. Gospel according to St James Martin). 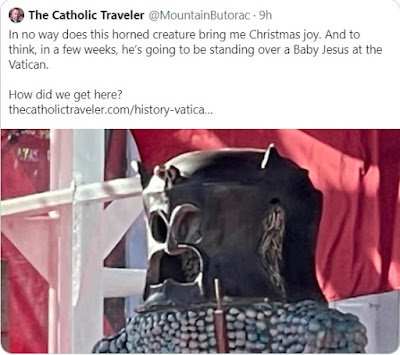 Moloch, included in the 2020 nativity scene as an ecumenical gesture. Reactions from the public have been largely favourable. Dr Taylor Marshall, in his show, described the scene as "very moving", and Austen Ivereigh added "I see the one-eyed hexapod as an embodiment of Pachamama, whom we all adore. See my new book Pope Francis talks in his sleep, consisting of magisterial eavesdroppings on the papal slumbers." By the way, Dr Marshall, if you ever read this, "Eccles" rhymes with "freckles". Stay saved.
Posted by Eccles at 21:13