Austen Ivereigh not expected to resign

One of the closest confidants of Austen Ivereigh, the celebrated Catholic journalist, has denied rumours that the great man is about to resign from his various prestigious positions (Fellow of Campion Hall, scribbler for various publications, best-selling author - The Pope Francis Cookbook and Keeping Fit with Pope Francis are this Christmas blockbusters), and devote himself to Catholicism instead. 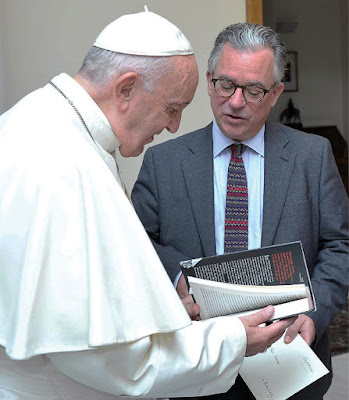 "'Pope Francis is very very very very wonderful.' You do have a way with words, Austen." Pope Francis, who has long been Austen's biggest - indeed, only - fan, has emphatically denied saying that his friend would chuck it all in at the end of 2020, having fulfilled his life's work. "Little Austen has a lot more to offer the world," explained the Holy Father. "Not just a few more books about me - Self-defence the Pope Francis Way will be out soon - but also his forthcoming treatise on Pachamama for Catholics." So, it seems that there will be no imminent conclave to appoint a new Pope's Minder: this is perhaps fortunate given the difficulty of travelling to Rome at the present time, although various potential sycophants such as Fr James Martin SJ and Massimo Faggioli will be sorry not to have their chances to become the Pope's new Very Best Friend.
Posted by Eccles at 18:27