Miracles are just a bit... unlikely

After our piece from Brian Cox, aged 13, explaining that science rules out the existence of the soul, another clever child has sent us a contribution. Hello, I'm Alice Roberts, of St Humanist's School, Birmingham. I may be only 11, but I won the school's Frankenstein Prize for Biology, and I am very very clever. Like Brian Cox, I have friends who call me Professor (as well as Miss Smuggy-bloomers) and when I grow up I want to be on the television!!

Now, miracles!!?? I've thought about them a lot, and my considered opinion is that they don't happen very often!!?? Father Chasuble, our school chaplain, said to me, "Alice, it will be a miracle if we can ever instil any common sense into your head." Well, he didn't manage to do it, so that proves my point, doesn't it!! Take that alleged miracle at Cana, for example! Many's the time I've tried to turn water into wine by following the recipe in the Bible - you pour water into big pots and voilà!! It has never worked!! Well, once it produced a brownish liquid, but that was just because the pot was dirty (Mummy said the cat had been sleeping in it). Anyway, this miraculous so-called wine made me very ill when I drank it!! 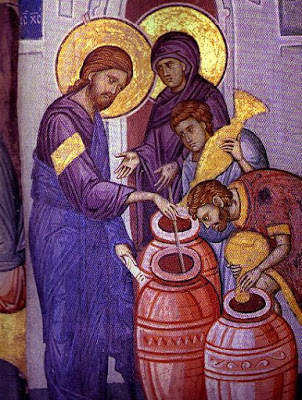 "That's three glasses of wine, and a gin and tonic for Alice." I've thought about miracles a lot. I tried walking on water, but that didn't work, and I got very wet!! How can Christians insult our intelligence by telling us that it's possible?? I even tried curing the blind man at number 12 by smearing mud in his eyes. Did it work?? No it didn't!! And the police gave me a good telling-off!! No, take it from me, miracles are very unlikely. You'd need some sort of supernatural help, wouldn't you?? Some sort of God, maybe?? Ha ha ha ha ha!! Well, I am giving miracles one last chance. I'm giving a big dinner party to all my thousands of admirers (once the Covid is over) and we'll see just how far we get with five loaves and two fishes!! If you ask me, it's very unlikely to work!!
Posted by Eccles at 17:40