As the Fake News Correspondent of the Italian newspaper Così fan tutte I was very pleased to be granted an interview with Emergency Pope Benedict (memo: check his official title). My German is not very good, although after a lifetime of watching World War II films I have picked up a few useful phrases, such as "Heil Hitler", "Schweinehund", and "For you, Britischer pig, ze war is over." Still, I didn't need to use these, as we spoke in English. 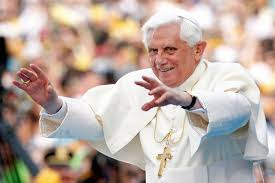 "Eccles! Delighted to see you!" Eccles: Now, Holy Retired Father, it is very good of you to give me an interview. My first question to you is: "Who is the Pope?" Benedict: Well, it's not me, is it? Francis, I suppose. Eccles (coming in for the kill): So if I were to contradict the claim that you refuse to deny the negative of the proposition that Francis fails to be anything other than the Pope, what would you say? Benedict (hesitates): Eccles (scribbling in notebook): BENEDICT NOT SURE WHETHER FRANCIS IS THE POPE. Eccles: Let's move onto something easier. The man in the news this week is Mr Potatohead. What do you think of him? Benedict: Who? Georg Gänswein: Er, that would be Kartoffelkopf. Benedict: Ah, yes, you mean Heinrich Kartoffelkopf, the great nineteenth century German theologian who refuted the ideas of Professor Maximilian Bohnen? Eccles (scribbling): BENEDICT ENTERS THE POTATOHEAD DEBATE. 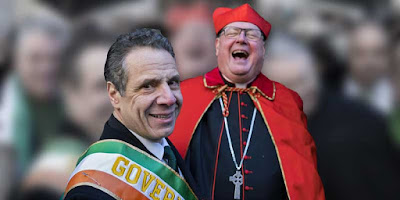 Mr Potatohead (R) with a dear friend. Eccles: Now, tell me your views about the leader of the free world. Is he Catholic? Benedict: Francis? Well he does attend Mass, or so I'm told. Eccles: Actually I meant Joe Biden, often described as the most devout Catholic since Edward Kennedy. Benedict (laughs hysterically and begins to choke): Eccles: BENEDICT BECOMES EMOTIONAL AT THE MENTION OF SAINTLY JOE BIDEN AND HAS DIFFICULTY CHOKING BACK HIS TEARS. Eccles: One final question if I may. The other man in the news is Dr Seuss, author of such books as If I ran the Vatican, And To Think That I Saw It in St Peter's Square, How the Grech stole Christ, and The Prat in the Red Hat. Would you ban his books? 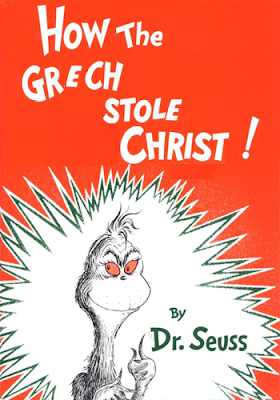 Banned in Malta. Benedict: Well, they never came up before the Congregation for the Doctrine of the Faith when I was running it... Eccles (scribbles): BENEDICT DEFENDS RACISM, SEXISM, GENDER BIGOTRY AND CLIMATE DENIAL OF DR SEUSS. Eccles: Thank you, Holy Thing (© Joe Biden)!
Posted by Eccles at 12:50