My Anti Moly, wot is an atheist, and not very saved, was sittin in an armchair last week, drinkin a "possum's spleen" cocktail - gin, tomato juice, custard, and a dead spider - when she said to me, "Eccles! De Natoinal Secular Society is gonna hold a Secular Europe Rally, and we is gonna go along. Dey has put an advert in de paper sayin, 'Because of equality and diversity regulatoins, we is now obliged to recruit some intelligent people as well,' so let's go along and see what it's like." 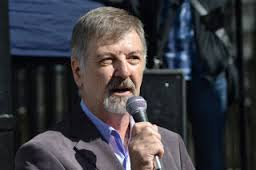 As you can see, fanatical loonies are still welcomed.

"But Anti," I explaned, "I is a saved pusson, and we doesn't do secularism in de Calumny Chappel." But she insisted.

Our host, Damain Thopmson, said he couldn't come, because he was goin to a meeting of de Pinkshorts - dat's a para-military group he has jioned, wot sits around all day eating cupcakes and waitin for de return of Gladys Mills, de once and future Queen. (When she turns up, dey will shout "Heil Gladys!") So Anti and me went on our own.

We was very pleased to see lots of celebrities marchin down de street saying "What does we want? Nuffink! When does we want it? Now!" For example, I saw Richard Dakwins carryin a banner, sayin, "Church of Dakwins. Please leave your brains outside" (dat's a joke I stole from de opera Oilanthe).

"I'm sure that Declan was only joking when he called me the Satanic Anti-Christ."

Also de famuous Cathlic Professor Tiny Betty was dere, de one wot has been so creully banned from a 20-mile radius of Clifton Catheddral. I used to fink dat Cathlics cuoldnt be secularists, but luvvly Tiny tells me dat on matter such as divorce and gay marriage she is much closer to de secularists dan to de Pop. "Is you gonna swim back over de Tiber?" I asked her. "Swim, Eccles? I finks I can walk on it!" she replied. 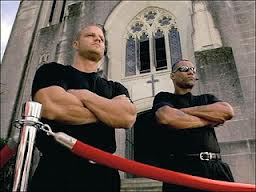 "Between the two of us we should be able to keep Professor Beattie out."

Well, de highlight of de secularist rally was a speech from Terry Sanderson, pointin to de acheivements of secularism in history. I can quote it in full. "Er, um, well, yes, we've all done very well." I like a speech like dat wot gives me plenty to fink about. I weren't so sure when he came to talk about what a grate fing it is to abort babies if dey is gonna be ugly like my bruvver Bosco, to have sex wiv poeple of de same sex, and to get put to death when you ain't feelin' too well. My Anti Moly ran away at dat point sayin "I aint ready to die yet, it was just a bad spider I ate."

I fink Terry must also be quite keen on slavery too: apparently dere was a chap called Wilbur Force who stopped it, and I fink he was gonna point out dat it's just anuvver example of how relligoin prevents us all from havvin fun. 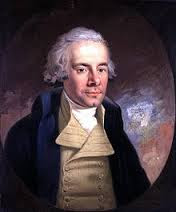 I gotta chance to talk to dis Terry pusson afterwards, and I fink his probblem is dat he got very bored by relligoin in school, and so decided dat de experts had got it wrong. He told me dat he also got bored by mathemmatics, so next week he is organizing an Innumerate Europe Rally, wiv de following powerful sloggan:

Well, we all had a good time bein secular. But when I left, and I said "God bless you, Mr Sanderson, you is a slightly saved pusson," he bit me in de leg. I fink I might have rabbis now - being ecumenical aint as easy as it seems.