Entering on a sacred journey of becoming whole

Rowan Williams, former Archbishop of Canterbury, has signed a letter to Boris Johnson condemning Conversion Therapy for "trans" people. (Rowan himself was never very good at converting people, even to Anglicanism.) 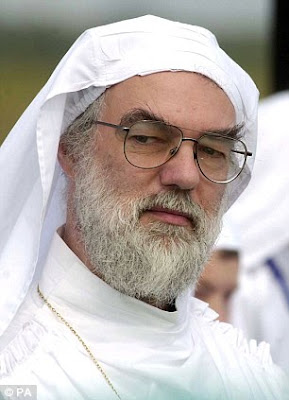 The Archdruid of Canterbury (no, this is not photoshopped). The letter contains the immortal sentence "To be trans is to enter on a sacred journey of becoming whole: precious, honoured and loved, by yourself, by others, and by God." See, it's not just about denying the identity given to you by God, putting on a wig and high heels, and perhaps taking some weird drugs and/or having a few bits cut off. An archbishop has spoken, so the argument is over. Or could it be a misprint for trains? Many children aged about 3 or 4 play trains. Chugging round the garden saying "I'm a train. Choo choo!" is perfectly normal behaviour in kids. What can parents do if they have a "trains" kid? 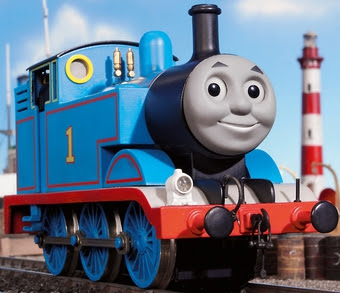 A child (Thomas) after "trains" surgery. Such children merely want to enter on a sacred journey of becoming whole (© Archdruid Rowan). Their parents should encourage them with "trains" surgery - remove their legs and have wheels fitted; feed them on coal; fit a little chimney to the top of the head. All this is available on the National Health Service, and it is only right. Well, that's settled. People who have already adopted a "trains" existence have found their true station in life, and should not be converted to a "normal" existence - that would be going off the rails completely! With that slight edit, we agree totally with his Druidness. Just a biological question to finish off. What does "non-binary" mean? Binary... 0 and 1... well, without getting too anatomically explicit here, your naughty bits vaguely resemble one or the other, don't they?
Posted by Eccles at 13:08