A bit of a new venture here - usually we go for Bad Hymns, Bad Cardinals, Ugly Churches, Instruments from Hell, etc. (and some of these contests will be due for a repeat soon, as they were last held in 2018). But here we're going for something GOOD. I have 32 candidates to be patron saint of England. All are English except George, Augustine of Canterbury, and Joseph of Arimathea. Will George hold onto his title, or will someone else be more popular? The Twitter poll begins tomorrow. 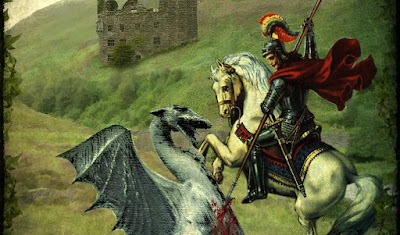 Very few of our entrants have slain dragons. Meanwhile a plug for an old piece I wrote about St George. Our candidates (did I forget anyone obvious?) are: "A dragon outside, you say? On my way..."

N.B. It seems that the hashtag #WCPSE has also been used by the Western Canada Paranormal & Spiritual Expo, but I am sure they won't mind. They probably saw it coming anyway.